NeuRA is coordinating the Sydney site for the DIAN (Dominantly Inherited Alzheimer Network). This study sets out to look for biological changes that occur in people before they develop the Alzheimer’s symptoms such as memory loss.  Over the last two years, NeuRA has been working on a clinical trial program aimed at preventing the symptoms of Alzheimer’s by removing amyloid from the brain before symptoms develop and before the nerve cells deteriorate.

Historically, the clinical features, cognitive profile, and brain changes that occur in individuals with Alzheimer’s disease are well established, especially during the symptomatic phase. Dr Aloysius Alzheimer was a German doctor who described the first published case of Alzheimer’s disease in a 51-year old lady in an asylum. After her death, Alzheimer examined her brain, and using staining techniques that were advanced for the time, he could identify the distinct presence of amyloid plaques and neurofibrillary tangles.

These pathological markers are now known as the hallmark features in the brains of individuals with Alzheimer’s disease. Since Alzheimer’s discovery, the research in the field of Alzheimer’s disease and neurodegenerative research overall has grown but not in ratio with research works on heart disease or cancer. The next ten years promise greater opportunities for research, drug trial programs, and more refined early awareness programs. Through research we are now able to replicate the disease in rodent models, identify cognitive impairment profiles, identify the structural and chemical changes that take place in the brain, and the clinical features of the disease which manifest into what is known as dementia.

What was known to a lesser degree until recently was the trajectory of clinical, cognitive, biomarker, and brain changes that occurred during the presymptomatic phase of Alzheimer’s disease. That is, the stage when the disease process has begun but there are no observable symptoms. In comes the Dominantly Inherited Alzheimer Network (DIAN) Study, a multinational collaboration that is based at Washington University St Louis and lead by Dr Randy Bateman. The cohort of the DIAN study is comprised of individuals who carry a rare genetic mutation that causes Alzheimer’s disease, typically with an early onset in middle age.

In 2012, the DIAN Study published landmark findings in the New England Journal of Medicine, essentially mapping out the pathophysiological changes that occur in the presymptomatic stage. The findings revealed that the build up of amyloid in individuals who progress to develop Alzheimer’s disease begin to accumulate an astonishing 20 years prior to symptom onset. Further, structural brain changes can be detected 15 years before, and changes in memory 10 years before. If there was one lesson to be learned from this study, it was that much of the disease process has already occurred by the time an individual is diagnosed with dementia. Dementia is not the beginning; it is a manifestation of decades of biological and pathophysiological changes.

If there is a time to intervene in this disease process, we now know that it is before individuals begin to develop symptoms. But how can we predict if an individual will develop Alzheimer’s in the first place? Well, we can’t. We know of the risk factors for developing dementia, but we do not know the exact cause. There is however one exception to this. We do know that the individuals in the DIAN study who carry the disease causing mutation will develop Alzheimer’s disease, and therefore they are present as the perfect group to study longitudinally and trial treatment.

And because the disease process is the same for those who have the genetic mutation and those that do not, the findings from studies on the DIAN cohort are applicable to non-genetic cases of Alzheimer’s disease.

The DIAN Study has three sites across Australia; Perth, Melbourne, and Sydney. Dr William Brooks and Prof Peter Schofield of Neuroscience Research Australia lead the research effort at the Sydney site. The DIAN study has been running since 2009, and in 2014 an extension of the DIAN study called the DIAN Trials Unit was initiated.

DIAN-TU is a landmark prevention trial of two disease modifying experimental drugs whose development and purpose stem directly from the pathophysiological staging that was identified in 2012. The two drugs are being trialled in presymptomatic individuals across Australia, and aim to clear the build up of amyloid in the brain, using two different mechanisms. The goal is for these drugs to delay the onset of symptoms by modifying the disease process early on.

From here, the hope is that the outcome of the DIAN-TU is one which shows that we are moving in the right direction in preventing this disease from afflicting more individuals and their families. Amanda Ayliffe, the first participant enrolled in the DIAN-TU, states “Memories make us who we are”.

Enabling individuals to hold on to previous memories for a little while longer would alone ease some of the burden that Alzheimer’s disease places on individuals, their families and our communities.

Not to mention the tremendous improvement in other areas of functioning and quality of life that could be derived from this important preventative trial being undertaken here at NeuRA. 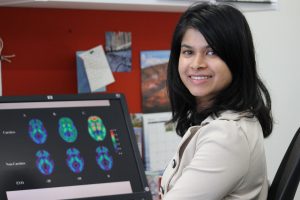