Growing up with a bright, studious neighbour whose company he enjoyed was one of the primary reasons that Yiru Zhang (below) decided to pursue a career in medical research. As a teen Yiru saw first-hand how the onset of schizophrenia diverted his friend and neighbour from her scholarly ambitions, and felt called to understand what caused the disorder and how it could be better treated. 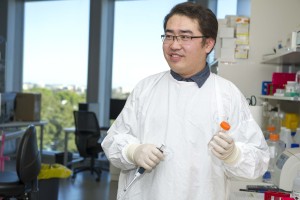 “We went to school together,” Yiru recalls. “She was very smart. We shared ideas about science and talked about our future and our ambitions. Then, in the middle of high school she was diagnosed with schizophrenia. That was 15 years ago in China and at that time you would be checked into hospital and you would be unable to go to school.

“When I finished university and was thinking about a Master’s degree my friend was finally checked out of hospital and the doctors said that she could try to take the exam to get into university. Because she was very smart, she did it, but still she was not as good as before. That’s when I realised that mental illness is a serious problem that can have lasting consequences. But we don’t know how to help because we don’t know what causes mental illness. That’s my dream, I want to do medical research to understand what is happening in the brain to cause illnesses like schizophrenia.”

Yiru pursued study in biotechnology in both China and Canberra, at the Australian National University, which led to starting his medical research career at NeuRA in 2013, working with Prof Cyndi Shannon Weickert and Dr Vibeke Catts.

The second project is to understand whether oxidative stress, which is common in schizophrenia, may also contribute to this cortical reduction. If this is found to be accurate, it may lead to drug treatments that can reduce levels of oxidative stress in the brain, which may lead to an improvement in symptoms.

Yiru’s areas of research will help us to better understand some of the cellular and molecular mechanisms at play in schizophrenia; a dream he has been working towards for many, many years. “At the beginning of each October I give a small gift to Cyndi,” he says, “to thank her for giving me this great opportunity so I can finally understand what schizophrenia is and what happens to those diagnosed with it.” Cyndi thinks the best gift of all is to have bright students like Yiru from all around the world come to the Schizophrenia Research Lab in Sydney to devote time and talent to help solve the mysteries of schizophrenia.

Yiru Zhang is a recipient of the A.M. Wood Postgraduate Scholarship for Schizophrenia Research.