Dr Justine Gatt is an NHMRC CDF Research Fellow at NeuRA. Here she shares an interesting idea: if there are ‘risky’ variants of genes that cause mental illness, could the opposite versions of these genes protect against mental illness? In other words, are risk and resilience two sides of the same coin? And where does our environment fit in the mix? 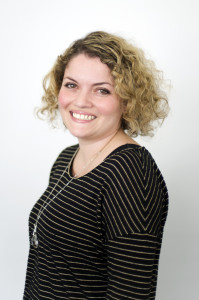 A problem with identification

Mental illnesses vary significantly in heritability (or genetic transmission from parents to offspring), from moderate to high, suggesting environmental factors also play a role. There is no shortage of studies into the genetics of mental illness, but this wealth of data often produces more questions than answers. Since between 40-90% of the cause of major mental illness is thought to be due to genetic factors, researchers assumed that only a relatively small number of genes comprise these genetic factors. However, identifying them has been frustratingly difficult.

Many gene variants have been associated with a mental illness in one study, only to fail to be associated in a subsequent study of the same illness. This is not due to bad science, but rather due to the complex ways in which genes interact to cause an illness, which often obscure a genetic association with a disease, and to the difficulty in identifying with statistical precision some of the very rare variants that are associated with disease.

To complicate the matter further, genetic studies suggest that there is a degree of genetic overlap between some illnesses, such as bipolar disorder and schizophrenia. This was an issue that we set out to address in a recently published study.

We asked whether there are some common genes that might be responsible for more than one mental illness (a property known as pleiotropy). If such genes could be identified, then the biological systems affected could be studied in detail to find pathways that are affected in illness and then develop ways to ameliorate these aberrant pathways.

Reviewing the literature for common genes

The mental illnesses that we surveyed were major depression, bipolar disorder, schizophrenia, anxiety disorder, and attention-deficit hyperactivity disorder. Our survey focused on results from meta-analyses: these are studies that contrast and combine results from different studies in the hope of identifying patterns. By summarizing a number of such studies, we hoped to be able to focus on genes that had been continually identified in aggregated groups of participants, circumventing some of the uncertainty that has surrounded genetic studies in mental illness research when using smaller samples.

In our review, thirteen genetic variants were found to be common across two or more mental illnesses. All of the genes were potentially relevant to the function of the brain, encoding proteins of neurotransmitter systems (dopaminergic and serotonergic pathways) or nerve growth proteins called neurotrophins. For example, a variant of the receptor for serotonin called HRT1A was found to be a risk variant for both major depression and bipolar disorder. Since serotonin regulates mood, we speculated that the variant in HRT1A, which experimentally is shown to relate to reduced serotonin signaling in the brain, may underlie some of the mood dysregulation in these illnesses.

Another genetic variant, which encodes the neurotrophin BDNF, was commonly implicated in both schizophrenia and bipolar disorder. These two illnesses share some symptoms, such as delusions, which may be due to aberrant growth in synapses, or connections between nerve cells, regulated by the ‘Val’ variant form of BDNF. 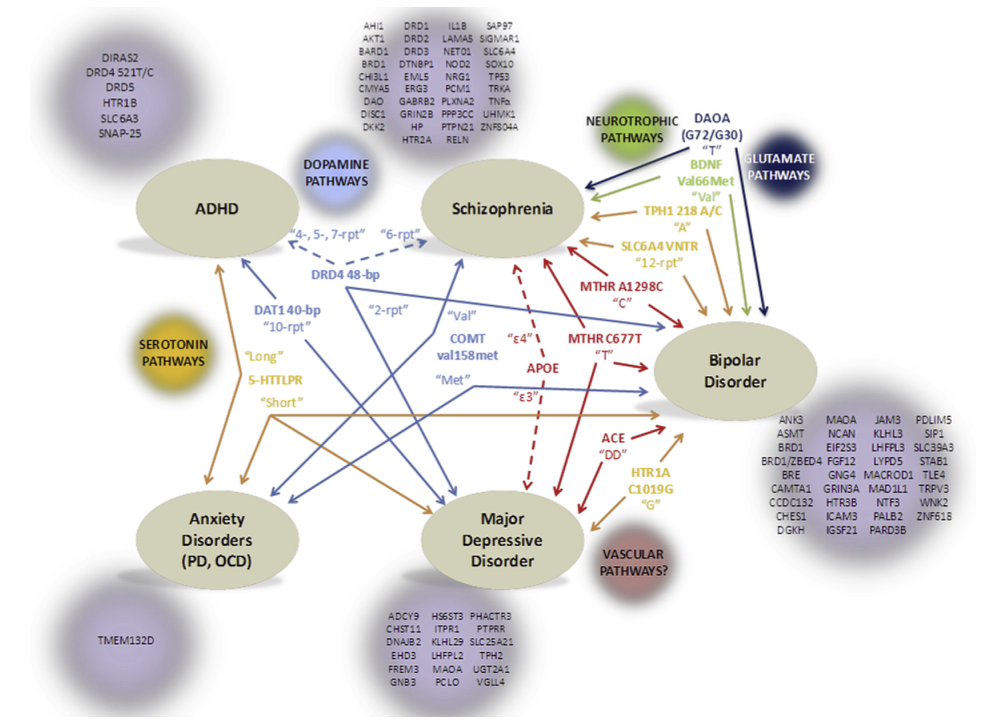 Genes implicated in the five mental illnesses studied. The common genes between illnesses are in the centre of the diagram with arrows to show the related illnesses, and are grouped by colour to designate common functions in the brain.

‘Genotype’ and ‘phenotype’ are terms used by geneticists. The genotype is the specific genetic code, while the phenotype is the outward characteristic that arises from the genetic code. This could mean a simple characteristic like eye colour or it could mean a complex set of traits that make up an individual personality. A variation in the genotype may affect the phenotype in a different way to the opposite genotype. We now wonder whether the opposite genotype, or allele, of the mental illness risk gene variants we observed might be variants that lead to a resilient phenotype. These ‘protective’ gene alleles or genotypes could be tested in the same way as genetic links to mental illness.

We have started to measure the factors that contribute to an individual’s resilience. In my previous blog post I explained how my colleagues and I have developed a questionnaire to measure qualities that define wellbeing. Results from this psychological measure can be combined with genetics and brain imaging to start to paint a picture of a biological resilience signature.

The goal of our future research is to first understand the neuroscience of resilience; that is, the specific neural pathways that predict levels of resilience to trauma over time. We plan to do this in our large twin cohort. By comparing twins, we have the added opportunity of understanding the relative contribution of genetics and environment to resilience and neural circuitry. Once we have identified the neural circuits that drive resilience and are also impacted by genetics, we could then start to test some of these protective genetic variants to determine whether they are, indeed, contributing to this detected variation, and how much of this variation they are contributing.

The role of our environment (or life experience) is also a crucial factor in this process. In this regard, we will also examine the interactions of genes with environment and how different positive and negative life experiences may modulate these neural pathways towards resilience. The findings from this study will then help us understand why some people are more resilient than others, and ways this could be optimally promoted in children and adults alike.