‘The World According to Richard’ (Part One)

Richard Schweizer has schizophrenia. In this three part blog series he walks us through his journey from his initial symptoms to how he feels about the future…

It’s a simple idea, but a powerful one.

Now I know your immediate reaction is one of surprise, perhaps rejection, perhaps anger. How can a person who has schizophrenia, who has experienced its most terrible symptoms say it’s normal? How can I possibly say it is normal to hear voices, normal to suffer paranoia, normal to have bizarre delusions about yourself and your place in the world? How can I possibly say it is normal when so much brain science is discovering the abnormal brain conditions that give rise to mental illness?

I accept these questions. And yes, on one level, on an important level, schizophrenia is abnormal and deserves the care and support and resources that brain abnormalities require in their sufferers. Schizophrenia is quite abnormal.

But on perhaps a more fundamental level; I say that schizophrenia is normal.

When you look at the distribution of mental illness like schizophrenia in the population, when one looks at the history of madness in all cultures, schizophrenia regularly arises. Indeed, 1 in a 100 will suffer it in contemporary society. So, when you look at humanity more broadly, over populations and over time, we find that madness has always been with us, regardless of how it is treated.

Madness accompanies humankind, just like anger does, like fear, love and hatred do. Madness has always been there and, for the unfortunate among us that suffer, it always will be.

So what is the upshot of this idea? What does it mean if you come on my rhetorical journey and accept that schizophrenia is normal?

And it is to these ends that I dedicate this three-part blog:

‘The World According to Richard’ 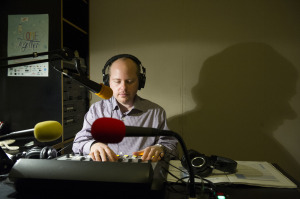 Like most people, I was born at a very early age. My upbringing was stable and secure. I lived in a house of care and concern, with hard working, loving parents and grandparents. When I was in kindergarten I used to wear a Superman cape. When asked who I was, my reply was inevitably “Superman!” When I had to take the cape off for sleep-time my name was Richard again. Perhaps, at this young age, I was already looking for something greater in my life.

My record as a student was strong. I had received scholarships for school at Sydney Grammar and for an undergraduate in arts/law at Sydney University. I had plenty of friends. True, I was prone to bouts of depression, but I always got the job done. I enjoyed writing and playing music with a band; I read voraciously about Australian politics; I participated in the cultural life of the university; and I had girlfriends.

My onset of schizophrenia occurred at a time of a number of stresses in my life. I had law exams and was in the process of breaking up with my girlfriend of two years. I had developed a bad eye condition that required me to become accustomed to hard contact lenses (they are still a pain in the neck), I was smoking a bit – though not too much – pot, and I was about to start a Summer placement with the NSW Attorney-General’s office. 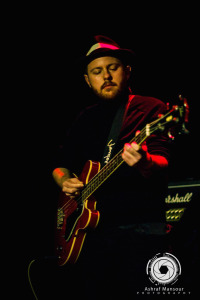 Richard Schweizer on stage with his band

I don’t remember much of this period, so bear with me if my account is fragmented.The first symptom I recall happened while I was sitting in class during my law degree. A blanket seemed to come down over my senses. I felt detached; distant from the world. If you are a movie lover, think of the scene in Trainspotting where Ewan McGregor overdoses and looks at the world down a lengthy corridor.

I also experienced bizarre thoughts. I can recall, at one time, thinking my friend was the devil. I knew then that that was a bizarre thought, but it popped into my head regardless. Much later, my GP said that symptoms of schizophrenia often concern themselves with things we love or hate. Some months later whilst in the Sydney Clinic and reading a magazine article about Bob Dylan (whom I idolize) a thought popped into my head… kill Bob Dylan. This disturbed me greatly.

I also remember having visual and conceptual ‘flashes’. This is hard to describe. Say, for example, on television I would see a cartoon character get banged on the head and have stars rotate around their head. That image would ‘flash’ out for me, almost as if there was a coincidence, or as if something more, going on. I refer now to another movie, this time ‘A Beautiful Mind’. Think of the scenes where Russell Crowe stares at newspapers and hidden messages flashed out at him. That’s what it felt like.

There was a darker side to this too. I would see/think flashes of violence when I saw certain people. I remember with distress a time when I saw my then girlfriend mutilated by violence. I remember, too, an occasion when I was being introduced to staff in the Attorney General’s office and I saw a reflection through the window on an accompanying building. For some strange reason I kept thinking the reflection was a gun, pointing at me. I knew, rationally, that it was a reflection, but I kept thinking it was a gun.

And then there was the voice. At least, I think it was a voice. It may have just been the artifact of an audible imagination. Reading later of other people’s experiences, I am not sure if my voice was as clear and strident as what many experience. Nevertheless, I did imagine some kind of voice, and it would tease me mercilessly about my greatest fears. Perhaps my greatest fear has always been losing my mind – my most valuable quality. The voice would say “ha ha, you’re losing your mind”. Just imagine it – some sort of phenomena arising from deep out of your mind, knowing all your fears and weaknesses.

With experiences like these perhaps it’s normal (there’s that word again) that I became emotionally unstable. I became paranoid, depressed and anxious. The strongest emotion I felt was fear – fear that I would hurt myself or someone else.

At some point in this downwards trajectory I went to my parents with a plea for help. I can’t remember how it started but I had been taking advantage of a free counselling service, and my counsellor had promised me I did not have and would not have schizophrenia. I guess I was able to cover things up pretty well, as they didn’t pick it up.

I arrived an hour late for my first day at the Attorney General’s office, saw the gun, and was feeling deeply unstable. I visited that same counselling service for an emergency walk-in session, but my normal counsellor wasn’t there. Instead I met with a lady who, after hearing me out, gave me two excellent pieces of advice: “keep yourself grounded, literally on the ground, and tell your mum”.

Around about that same time I had clambered up on my house’s backyard pergola to climb into my brother’s room as I had forgotten my key. My mum was immediately concerned by what I told her about how I was feeling and also by my risky behavior climbing onto the pergola. She booked an appointment for me to see my GP the next day. The GP listened to my story and told me to take Risperidone, and to come back and see her the next day. She also said not to look up what the drug was given for.

Of course, that night my mum looked up Risperidone on the Internet, and it said “for the treatment of schizophrenia”. Mum showed me.

My first reaction was to go numb. I didn’t know where I was. I went up to my room and immediately searched the Internet for non-pharmaceutical treatments for schizophrenia. I had a strong belief before then that drugs altering the brain’s chemistry should be avoided at all costs. (I now realise they are all but inevitable for certain serious conditions).

The significance of what I was realising washed over me – a rising flood.

I came back downstairs. I don’t remember a great deal after that. Perhaps my mind has blanked out the terrible experience.

I remember two things; one, crying tears, so many tears with my parents. I wailed like a baby. The other thing was asking my parents “Why did Omi and Opi [my grandparents] survive the Holocaust, only for this to happen?” I do not know why I asked that question. I guess the Holocaust was the deepest historical event affecting my family. Perhaps I thought this was an injustice that they should be spared, to see my life shattered. I still don’t know why I said it.

It was the worst night of my life.

Later my parents told me, that my brother had heard me crying that night and asked “What’s wrong with Richard?” I felt terrible that I should burden him too. “Richard has schizophrenia” they told him.

That night I saw hideous black ghosts flying above my bed. I left my bedroom and crawled into bed with my parents; a deep reversion to the childlike.

The next day I entered the Clinic.

Editor’s note: Part Two and Part 3 of this series will be posted in the coming weeks.