‘The World According to Richard’ (Part Two)

In Part Two of Richard Schweizer’s blog, entitled ‘The Road to Wellness’, he takes us into the Sydney Clinic where he was admitted not long after his schizophrenia diagnosis.

I spent about 3 months in the Sydney Clinic; a private mental health facility in Sydney’s Eastern Suburbs. My time there was not that bad. I have good things to say about the staff. I remember one nurse talking to me about my life, my mind, my illness. She made the observation that people suffering schizophrenia, particularly during the on-set of psychosis, need ‘not too little, but not too much’ stimulation. I still find this to be fairly accurate today.

My time at the clinic is, like the early period of my illness, somewhat hazy. This may be because I think I was put on sedatives initially. I have memories of lying in bed, while my parents sat beside me. To this day I thank the fates that my parents were so close by, so supportive. It’s one of the main reasons I’m still around today.

The Sydney Clinic began with me seeing a psychiatrist and getting a diagnosis. I talked at length about what I had been experiencing, what I had done, how I felt. The doctor was particularly interested in my pot smoking; I guess he wanted to ensure that what I had was onset-schizophrenia, and not drug-induced psychosis (typically drug-induced psychosis is very intense for its sufferers, but tends to pass when the sufferer stops taking the drug causing the psychosis). He was very measured, very calm and analytical. I can’t even remember if he pronounced the diagnosis, or if it was my GP who had said that. Either way, I knew I was sick. I knew I had a mental illness.

As I write, another memory of the period occurs to me. Before talking to my mum and seeing my GP, I made several efforts to clear my mind and put myself on an even keel. As I have said, I went to a free counselling service several times. I tried cleaning and organizing my room and I saw an eye specialist for my ocular problems. I also went to see my family homeopath, a wonderfully kind man who I still see.

One of the more interesting tasks I undertook to maintain my wellness was to write “My Eight Steps to Wellness” in my journal. They were:

I guess these steps may seem obvious, but it was good for me to clarify them. I think they helped me handle the disruption of schizophrenia. I would recommend them to anybody as important steps to leading a good life, mental illness or not. When I read these steps to my psychiatrist, he added “stay on your medication” as number nine. Since that time, I have taken my anti-psychotic medication every single day. I am now 33 years old. 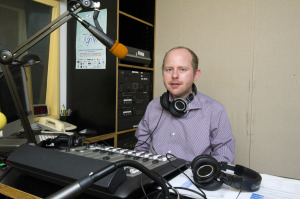 Then came the drugs

The tale of my medication is interesting. As noted, my GP put me on Risperidone. My psychiatrist at the clinic immediately changed me to Zyprexa. This didn’t work so well, so he upped my dose considerably. I still was not responding well, so we switched to another drug. I can’t remember what it was. It may have been Serenace or Abilify. I was still having trouble maintaining my cognition. I had trouble concentrating on tasks requiring abstract thought. For example, in group therapy session I had to leave because it was too much to take in.

My doctor then pulled out the big gun, Clopine. Clopine has a significant side-effect profile. In one percent of people it can cause a major drop in white blood cell count, so you need to take a blood count test every month. It also makes you very sleepy. Aside from that, I responded well to it. I even remember coming out of the clinic to travel with my parents to Vanuatu for a holiday. While there, I was still experiencing symptoms though – I had that sense of fear and an over-whelming sense that my mind was being engulfed. It felt like my mind was a tiny island of rationality in an encroaching sea of fear. I had brought a guitar with me. I remember writing a song about how I felt, only to destroy it later, as I wished to forget what was happening to me. With the calm of the holiday, I also began imagining that voice again: “Ha ha, you’re going crazy”. When I got back I told my GP of how I felt, of suicidal urges, and she immediately booked me back into the clinic for another stay. I guess it must have been at about that time that my psychiatrist upped my dose of Clopine. I stayed on this dose for half-a-dozen years or so; after some time my psychiatrist and I agreed I could try cutting the dose, which I did successfully. The drug, even at this lower dose, has me sleeping 12 to 13 hours a night which, by the by, has meant I don’t think I will ever be able to hold down a full time job – I am just too sleepy to wake up at seven-thirty or eight.

Sometimes if you don’t laugh, you may cry

When I was first admitted, I, with my parents, had to answer a number of questions of an administrative nature. I recall the lady there asking me “any allergies?” I responded, “only lies”. An example of the quirky way my mind works. This, of course, was a joke, though no-one in the room felt like laughing. I still figure laughing is a valuable thing to have in life. I have since joked with friends and parents that if there is ever another military call-up in Australia I’ll be safe from harm: I have flat feet, bad eyes and a mental condition.

I also remember upon entering my room for the first time, the staff removed any objects that I might use to self-harm with – telephone wires, belts, sharp objects and so forth; I had told my psychiatrist that I was having specific suicidal ideas. Looking back on this time, I understood that all this commotion was important to make sure I did not self harm, though it also felt, to a frightened and confused man, as if there was some kind of degradation ceremony taking place. I never acted on the suicidal impulses (other than one night deliberately over-drinking at a family dinner, but that is another story…). I now know I never will. There is too much beauty in the world to cut short one’s time here.

The clinic was, remarkably, a very calm place. There were many people with problems, but few were happy to talk about their issues. I remember telling one girl I had schizo-affective disorder and she saying “Oh yeah, schizo-affective is a bitch to manage”. I realise now that she was commiserating with me. At the time though I thought she was saying there was no hope for me. I felt it was a judgment about the future of my mental illness.

I also recall a fellow in there dealing with bipolar disorder. He had had the illness for quite a time before he was diagnosed. I remember him as being a very real and strong man. He told me that his life had hung in the balance, but that he had chosen to be a “warrior for the light”; he would not give in to darkness and despair.

Other than that, I did not talk much with other people. When I was re-admitted, they put me in a shared room with another fellow who remained silent as he suffered through whatever it was that burdened him. I read magazines without taking anything in. I listened to a CD of classical guitar a friend had bought for me. I read Patrick White’s The Tree of Man (light reading for a clinic in-patient!). A dear friend brought me a mini-television one day when he visited. The darn thing only picked up the ABC, but perhaps it was best that I only watched the relatively somber line-up of our excellent public broadcaster whilst I waited for my meds to kick in. 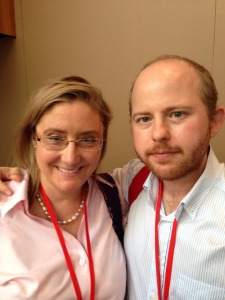 Prof Cyndi Shannon Weickert from NeuRA and Richard Schweizer at TEDx 2014 where Prof Weickert spoke on schizophrenia. The pair are good friends

My parents visited every day. They would always give me a huge hug when they left, even if this was out in the corridor. Close friends visited me, though at that time I had not decided to go public with my illness. Often my parents would bring me home during the day, but this ended upon the request of some of the nursing staff that wanted to keep me under observation.

I guess my final thought for the second part of ‘The World According to Richard’ would be that, as calm and restorative a place as the clinic was, perhaps the best place for a mentally ill person to get better is not in the surrounds of other people going through significant personal problems. Perhaps a farm surrounded by family would be better? But I don’t know for sure, I am no psychiatrist.

Editor’s note: Part Three of the series will be posted in the coming week.