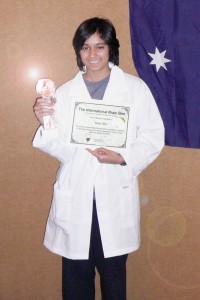 NeuRA was lucky enough to host one of Australia’s brainiest teenagers, Uma Jha, when she visited last week for a work experience placement.

At just 14, the Perth native beat 3000 hopefuls to become the champion of the 2009 Australian ‘Brain Bee’; a neuroscience competition. As the sole representative of Australia, Uma continued to the international Brain Bee championships in San Diego and came head-to-head with students and high-school graduates as old as 18 from seven different countries.

“It was pretty incredible to be representing Australia. It was just good to be there,” she says.

But Uma did more than just participate; she came fifth and credits the ‘Brain Bee’ competition for inspiring her to pursue neuroscience.

“It’s changed my life I suppose, because before I don’t know if I would have considered neuroscience but now here I am,” she says.

At 16 years old, Uma is now a first year neuroscience student at the University of Western Australia and the youngest aspiring scientist NeuRA has hosted. She flew in especially from Perth to work with Prof Vaughan Macefield, a neurophysiologist here at NeuRA.

“I’ve had many work-experience students over the years and Uma was particularly delightful and engaging,” says Prof Macefield.

Uma’s time at NeuRA working with Prof Macefield has only encouraged her passion to uncover the mysteries of neuroscience.

“There’s so much more that we can find out and I just want to be part of it,” says Uma.