A study published in Molecular Psychiatry has identified changes in inflammation-related biochemical pathways in schizophrenia that interfere with proper brain nerve cell communication. Researchers have found the first direct evidence in support of increased kynurenic acid production in the brain, which is known to block a key glutamate receptor. This discovery paves the way for the development of better-targeted therapies with fewer side effects for people with schizophrenia.

The study is a collaboration between Neuroscience Research Australia (NeuRA), UNSW Sydney and Macquarie University.

The study found elevated kynurenic acid in the brains of people with schizophrenia suggesting an overproduction of kynurenic acid, especially in response to inflammation, which could be detrimental to brain function. 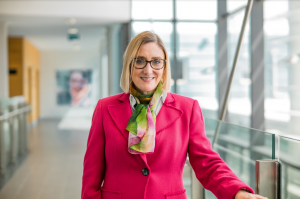 “This is exciting for the field of schizophrenia research because in addition to our previous findings that point to the immune cell’s role in schizophrenia, we have now identified another cell target in the brain. This provides a better understanding of the molecular and cellular mechanisms underlying the deleterious effects of neuroinflammation.”

It has long been suspected that metabolism of the amino acid tryptophan, commonly known to produce the “feel-good” neurotransmitter serotonin, is involved in schizophrenia. During inflammation, tryptophan is broken down into kynurenine, which can then can go down one of two avenues; one that forms a chemical compound called quinolinic acid and one called kynurenic acid. There is debate about which avenue leads to brain pathology in schizophrenia. 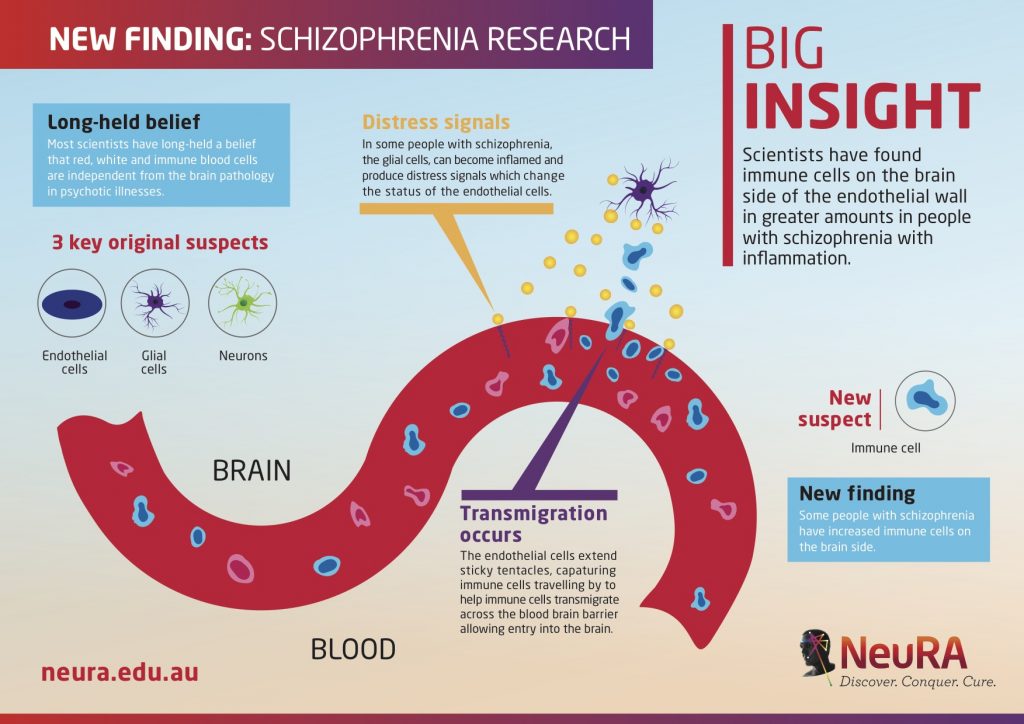 Previous finding: Professor Cyndi Shannon Weickert identified immune cells in greater amounts in the brains of some people with schizophrenia.

But now researchers have narrowed down the culprit to increased kynurenic acid production and they have other evidence to suggest that astrocytes are also involved. Astrocytes are the main cells that provide food and metabolic support to the brain nerve cells and in the case of schizophrenia, they are providing more kynurenic acid. 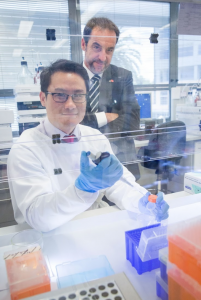 “We have pinpointed the source of the problem,” said Professor Gilles Guillemin, a world-renowned expert in tryptophan research from Macquarie University. “This understanding provides a new target for cell-specific treatments that reduce kynurenic acid production. What we need to find out is why people with schizophrenia have higher expression of the kynurenic acid-producing enzyme.”

This study also demonstrated that biochemical changes in blood can reflect the changes in the brain related to schizophrenia, such as volume loss of the prefrontal cortex and attention impairment. This suggests that the kynurenine pathway may be a viable target for the development of a clinical blood biomarker to help predict brain and cognitive changes in schizophrenia.

Associate Professor Thomas Weickert from NeuRA, further explained: “Researchers have been seeking a biomarker of schizophrenia for a long time. Our work suggests that blood kynurenine and tryptophan levels may be able to quickly and simply inform clinicians of the brain and cognitive status which could provide a more personalised approach to treatment with new drug therapies.”

Dr Edwin Lim from Macquarie University’s Department of Biomedical Sciences, said that while the results of this study are promising, caution needs to be exercised in treatments aimed at reducing levels of kynurenic acid in people with schizophrenia.

“Too much kynurenic acid is evidently bad for schizophrenia, but too little kynurenic acid runs the risk of exposing patients to excitotoxic-induced neurodegeneration,” said Dr Lim. “The baseline reference will need to be established in a larger population in order for biomarkers and relevant treatment regimens to be formulated.”