Why I research Alzheimer’s disease

Could there be a potential link between high blood pressure (hypertension) and the brain tissue changes responsible for dementia? PhD Student and Sydney Brain Bank staff member, Andrew Affleck elaborates on his research. 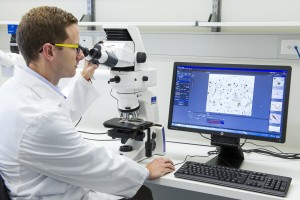 Over the past few months I have been approached by a number of family and friends, mostly curious to see how my PhD is progressing. Some also shared with me  stories of a loved one who either lives with a type of dementia, or is in a grey area where they know something isn’t quite right and suspect that dementia might be behind it all.

The stories were heartbreaking to hear because I could empathise with what people were going (or had gone) through, due to my own family’s journey with dementia; specifically, my grandmother’s diagnosis of Alzheimer’s disease. At another level there was a sense of empowerment. Even though dementia feels unjust and that something needs to be done about it and soon, working at NeuRA allows me to be part of a group seeking answers to the injustice.

Research into Alzheimer’s disease has come such a long way since it was first described at the turn of the 20th century, but with no cure and only symptomatic treatments currently available, there is still plenty of work to be done. Some research groups overseas have observed lower amounts of Alzheimer-type changes in the brains of people who took anti-hypertensive medications. This is an exciting finding, however, it is poorly understood as to why they saw this.

It is my hope that my PhD project will add to this growing body of knowledge through investigating the changes in the brains of Australians who have taken anti-hypertensive medication(s) compared to those who have not. I am currently assessing whether there is less evidence of Alzheimer’s in the brain tissue pathology of Australians who took anti-hypertensive medications. If a similar correlation is found here, I plan to delve deeper to see if there are possible cellular effects that are occurring.

In addition, I will look at the reasons why such medications could be effective – whether they have a direct effect on receptors in the brain tissue, or whether they affect the flow of blood to the brain. This study could provide specific drug recommendations for the prevention and treatment of Alzheimer’s disease.

In summary, I suppose I shouldn’t be surprised at how many conversations I continue to have about Alzheimer’s disease and dementia in general, considering there are more than 340,000 people living with dementia in Australia and 46.8 million worldwide. These figures and the growing financial cost, which is estimated to be US$818 billion globally, are the stories that motivate all of us – researchers, study participants, patients, clinicians, family members and politicians – to continue the arduous task of working together to beat this common dementia foe.