The discovery of genetic markers that determine how well a patient responds to lithium may change how bipolar disorder is treated. 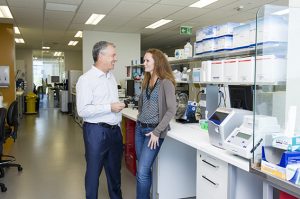 Lithium is the most commonly prescribed mood stabilising drug used for the treatment for bipolar disorder. However, it only works effectively in about a third of patients. Another third do partially well when prescribed lithium and the remaining third of patients do not respond at all.

Professor Peter Schofield and Dr Jan Fullerton at NeuRA and Professor Philip Mitchell at UNSW were contributors to the International Consortium on Lithium Genetics, which conducted a landmark study of more than 2500 people with bipolar disorder who had taken lithium.

The study examined the impacts a person’s genetic make-up would have on the response to lithium. This research has identified a region on chromosome 21 as being significantly associated with variation to lithium response, representing the first step in identifying the specific genes and molecular pathways underpinning response to lithium.

As the associated variants are quite rare, the clinical importance of these findings may be limited. However, the current shortage of good biomarkers of lithium response means that any robust genetic markers provide us with a real step forward.

The consortium plans to continue their work in better understanding the genetic signature that underpins lithium response by reaching out to other researchers around the world to increase sample numbers for an even more powerful study in the future.