The genes involved in bipolar disorder

Research Officer Dr Alex Shaw joined NeuRA after completing a PhD in cancer research. He is investigating the genetic underpinnings of bipolar disorder. 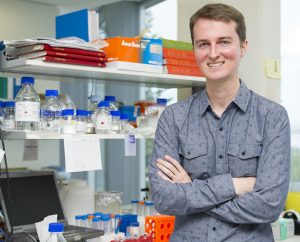 There is no single cause of bipolar disorder, but understanding how factors such as brain structure and genetics contribute to its development will help researchers to know how to best diagnose, treat and, hopefully, prevent the disorder. For now, though, the journey is in its early stages.

The cancer field has just started to create treatments targeted to particular genes, but we’re not there yet in mental illness research. Even knowing which genes are involved is difficult and its only since I started my post-doc five years ago that the psychiatric genetics field has started to pin down a small number of genes that appear to be involved in bipolar.

Although these genes contain DNA changes that are ‘significantly associated’ with the disorder, having these changes only increases your risk of developing bipolar by a minuscule amount, and so this information is far from clinically useful.

Fortunately, recent advances in technology have enabled sequencing at the level of the entire genome to become a reality. I have been working in Dr Jan Fullerton’s group, along with colleague Dr Claudio Toma, using sequencing data to investigate the genetic factors that contribute to bipolar disorder.

We know that the heritability of bipolar is very high, so that is the reason why so much effort is focussed on the genetics of bipolar. Specifically, we’re looking for rare mutations, for example those that are present in only a handful of individuals and not otherwise seen in the general population.

We have collected and verified many rare mutations from 15 families who were surveyed and will soon publish our results, focusing on which genes these rare mutations were found in and how this compares with other studies investigating the genetics of bipolar disorder.