Study: How to best manage the behavioural changes in frontotemporal dementia

Compared to Alzheimer’s disease, individuals diagnosed with frontotemporal dementia (FTD) tend to have worse behavioural symptoms and greater difficulties with their everyday activities, such as in organising household chores or putting on clean clothes each day. In addition, these individuals often lack insight into how their behaviours may impact others. These changes are difficult to manage and are a frequent source of stress and burden to the person’s family and carers. 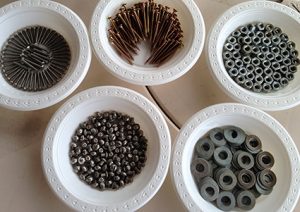 Nuts, bolts and screws that have been meticulously sorted by a person with FTD

Mark* (61 years old) retired from his job as a structural engineer a year ago after making a series of mistakes, and making some decisions which were both out of character and could have ended in dangerous consequences. Since then, Mark has developed a fixed daily routine where he maintains a rigid diet of specific foods (he eats two meat pies at lunch, and four chocolate biscuits with chocolate milk at dinner), gambles at the local TAB, and checks for ‘bargains’ at the shops, often purchasing many unnecessary items which he then carefully stores in his garage at home. Mark’s wife is frustrated that Mark seems so unconcerned about how his behaviour is impacting on their family.
Jane* (52 years old) was made redundant a couple of years ago when she seemed unfazed about no longer managing her workload in the office. Without prompting and encouragement to do anything else, Jane spends her days lying on the couch, staring out the window or pacing around the house. Her partner now manages all of the housework on his own, while still working full-time, as their finances have become tight since she stopped working. Most recently, Jane has been showering less frequently and has not been brushing her teeth unless prompted by her partner.
Such changes in behaviour are common in frontotemporal dementia, but can vary across individuals. In a recent study published in the journal Neurology: Clinical Practice, we were interested in measuring these changes in behaviour, and whether different behaviours had an effect on how much help the person needed with their everyday activities.

Study findings
We measured day-to-day activities, such as managing their personal hygiene, or ability to cook a meal. Then, we recorded any changes in these activities and how severe these were.  Specific behaviours which we found had an impact on everyday activities were:

Individuals with high levels of apathy (reduced interest or motivation to do things) had much more difficulty in completing their daily activities. For example, they are more likely to need assistance or reminding to have a shower, or to change their clothes every day.
In contrast, individuals with high stereotypical behaviours (who had more rigid, specific daily routines), were actually managing their everyday tasks better than those who had lower levels of these behaviours. This suggests that stereotypical behaviours may actually support the person in independently managing their everyday living tasks for longer.

Where to now?
Given the lack of cure, or effective treatment options, in frontotemporal dementia, the development of effective intervention strategies remains crucial. In order to develop these strategies, we need to better understand the disease process itself. The results from our study suggest that addressing behavioural changes should be a key focus of intervention, and may have benefits reaching beyond the behaviours themselves.
In future research, we plan to investigate the possibility of using behavioural management strategies for people with frontotemporal dementia and their carers. Through this we hope to learn better ways to manage behavioural changes and support carers in their role.