What leads to someone taking up a neuroscience degree and studying the causes of schizophrenia? Read on to find out about Juan Olaya‘s story. 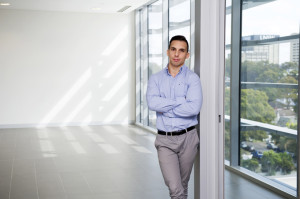 Although I started my degree in psychology, it was a neuroscience unit that led me to become interested in understanding the possible causes of schizophrenia. What I found really interesting was what causes mental illness to occur. I’m fascinated by the biological, mechanistic basis. Studying neuroscience allows me to explore the ‘how’ of mental illness. The brain is incredibly complex and intricate. Studying it makes me want to know more about how things can go wrong and how we can fix it.

In particular, I’m interested in the Neuregulin 1 type III (NRG1 III) mRNA that is increased in the brains of people at risk of developing schizophrenia. Using a mouse model that has an overexpression of this particular transcript, I have found that not only do these mice display schizophrenia-like symptoms, they may also be able to explain how an overabundance of NRG1 III may lead to the development of schizophrenia.

Understanding these mechanisms has the potential to lead to new therapeutic targets for a particular subset of schizophrenia patients. Indeed, identifying new therapies to treat schizophrenia is an aspect of future research that most appeals to me.

Due to the heterogeneity of the disease, two patients can have similar symptoms, such as hallucinations, delusions and social withdrawal, however what may cause their symptoms may be very different. Person A may have an inflammatory response, while person B may have a genetic mutation on the NRG1 gene. So I think a large part of the research should look at how to identify a subset of patients who are defined not by their symptoms, but by the underlying cause of schizophrenia. We need to hone in on that. We can then find a tailored therapeutic response that is effective in preventing or treating that particular subset of schizophrenia. I think that is the future of schizophrenia research.