I’m 20 and my father has dementia 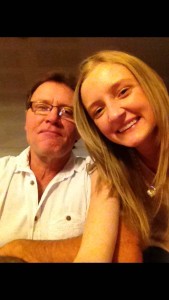 Samantha McMellon with her father

Theodore Roosevelt once said “they do not care how much you know, until they know how much you care.” As someone who is studying to become a secondary teacher I have seen the truth in this quote. However what if someone lost the ability to recognise when someone loves and cares about them. This is what it’s like to live with my father who has been diagnosed with Younger Onset Behavioural Variant Frontotemporal Dementia.

In 2013 we began to notice significant changes in my father’s behaviour. He was often angry and it was like nothing was able to calm him down. This is when we began our long and tedious journey to my father’s final diagnosis of dementia. He was 52 and should have been in the prime of his life.

Who is this man? He looks like my dad and still is my dad but his relaxed and placid personality has changed and so has his behaviour. At the time this was all unfolding I was 18 and was trying to complete my HSC. I struggled to comprehend that my dad was suffering from a terminal illness that I thought only developed in older people. This year it’s my brother’s turn to tackle the HSC and soon after that my little sister will face the same hardship whilst watching our father decline.

It has been incredibly difficult to watch mum try and struggle on her own with three teenagers and a husband who is like the fourth teenager instead of the other parent. My mother is my rock and without her our family would have fallen apart. However she cannot do it all on her own and I have found myself having to take on the responsibilities of that second parent.

Living with Dad is not easy. We often feel like we are walking around on eggshells to avoid any triggers that will spark angry outbursts and increasing aggression from him. One of the major problems caused by his dementia is that he cannot plan, organise and understand what is being said. It’s the simple things that he struggles with. For example, when I’m in a hurry of a morning and I ask Dad to pass me the peanut butter from the cupboard, he looks at me with a blank stare for more than five minutes before he moves to help me. But it’s too late, because I’ve already stormed off to grab the peanut butter myself because I’m in a hurry! It’s really hard not to get angry at him because most of the time it just seems like he is lazy and is ignoring me, but he is struggling to process what is happening around him. The blank look on his face is similar to the confused look that students give you when they do not understand what is being taught in class.

Dad also has to be constantly supervised because he cannot identify danger. For example, on a recent weekend away he went to iron a pair of pants and the ironing board collapsed on him. His instant reaction was to pick up the ironing board and spend the next five minutes trying to make it stand up again, however he did not see that the iron had fallen face-down on the floor and was burning a hole in the carpet. If he had been alone when this happened I hate to think about what could have happened, but luckily I was there to pick up the iron. To this day he still does not recognise the danger in that situation.

It’s hard to explain the everyday struggle of living with Dad. When you try to explain it to friends and family they always say, “I always forget that as well, he seems normal to me, that’s just men.” This is the most frustrating response because they are dismissing the severity of the disease. You cannot see the effects of dementia at first glance, it’s not like cancer when you see someone who has had chemotherapy and lost all their hair. Dementia is not always about forgetting where you left your car keys or wallet either. There are many different types of dementia and symptoms vary from person to person, impacting on their lives in different ways depending on which parts of the brain are affected. It must be hard for someone to physically feel fine and healthy but be told that they have a terminal illness.

Dementia deprives someone of their independence. For someone at the age of 54 like my father they should be happy, in a secure job with a stable financial income and enjoying all that life has to offer. Being forced into retirement and facing the prospect of losing his driver’s license is far from where my father expected to find himself in the prime of his life. I think about the future and wonder about the opportunities that dad could potentially miss out on: giving away his daughters at their weddings, holding his grandchildren for the first time, travelling the world and being able to enjoy his retirement. All of this has been taken from him as he quickly becomes less and less able to enjoy life.

But you must play the hand you have been dealt and make the most of every precious moment, even if it is with a complete stranger and someone you do not recognise, for both I do not recognise him, and his behaviour shows that he does not recognise me.

World FTD Awareness Week, October 4-11, is the perfect time to learn more about frontotemporal dementia and raise support for the families affected by it.