How does the brain control blood pressure?

In a world first, Prof Vaughan Macefield has developed a technique to measure how the brain controls blood pressure in health and disease.

What are you investigating here? 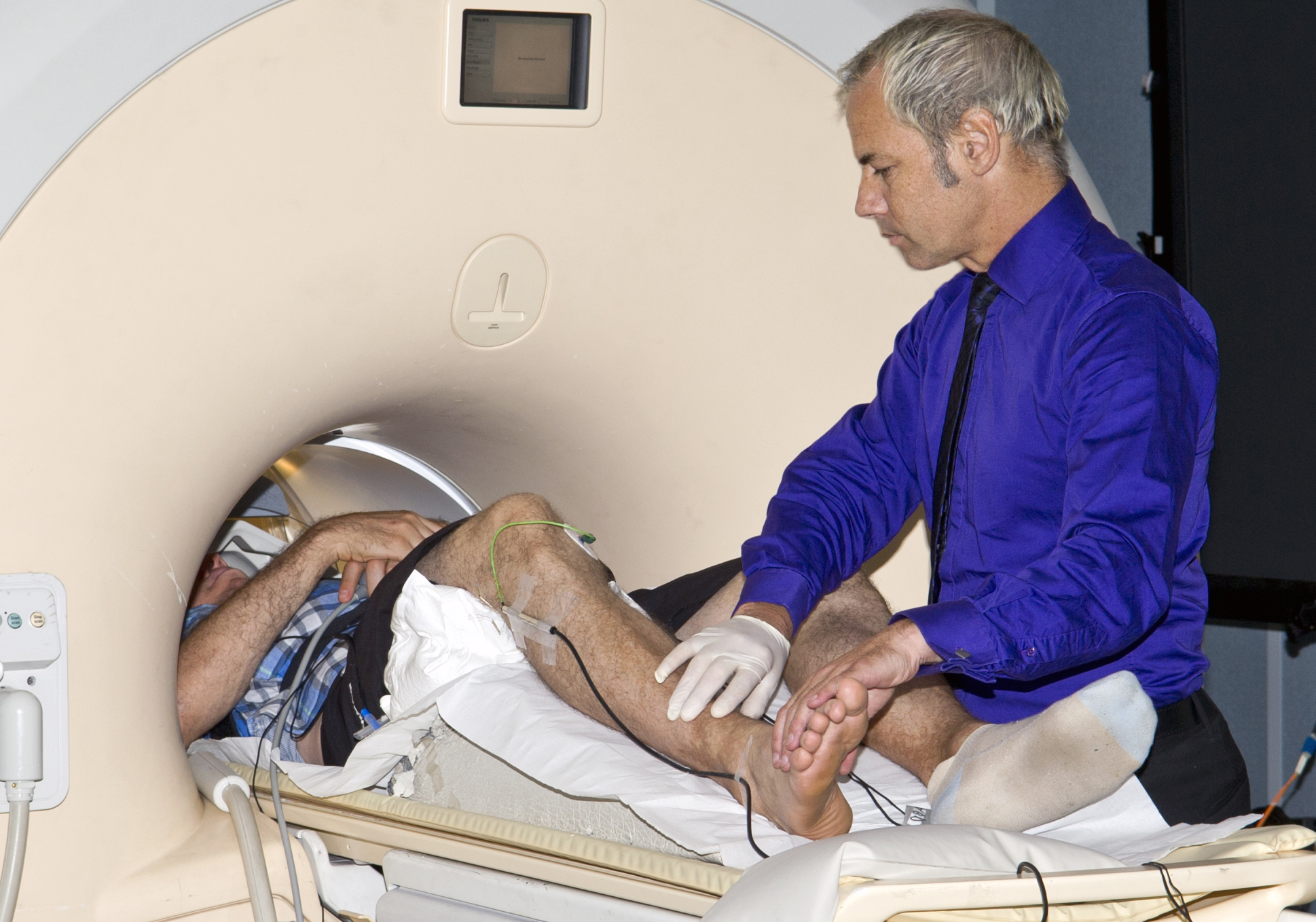 The volunteer in the MRI machine (pictured) has high blood pressure due to obstructive sleep apnoea (OSA). I have inserted a fine needle microelectrode into a nerve in his leg which is attached to the wires you can see just below his knee.

This microelectrode measures the vasoconstrictor signals that his brain is sending to his blood vessels to make them constrict and increase his blood pressure.

Once we have set up the volunteer, which we do in the lab and wheel him or her to scanner, I will take images of his brain with the MRI at the same time as recording the vasoconstrictor nerve signals through the microelectrode. This allows me to see which areas of the brain are sending these signals, and therefore which areas of the brain are controlling blood pressure. With these two measurements, I can get a very clear picture of how the brain is controlling blood pressure in both healthy subjects, and in those with cardiovascular disease.

Why is it important to know what areas of the brain control blood pressure?

Blood pressure needs to be kept constant – too low and we faint, too high and we may suffer a stroke. We know that diseases such as obstructive sleep apnoea – in which collapse of the upper airways during sleep cause repetitive episodes of low blood oxygen – also cause changes to the brain, affecting memory, for example. We have also shown that there are structural and functional changes in the brain in people with OSA, changes that cause the increase in vasoconstrictor drive that leads to hypertension. We have just finished a study that followed 20 volunteers with OSA over a year, showing that the structural and functional changes we saw in the brain are essentially reversed by treatment with continuous positive airway pressure (CPAP).

Now that we know what is happening in the brain in OSA, we want to look at other forms of high blood pressure, such as renovascular hypertension. This is the basis of a new NHMRC grant we have submitted, in which we will be recording the vasoconstrictor nerve signals, at the same time as imaging the brain, to identify changes in the brain before and after treatment. Renovascular hypertension is brought about by narrowing of the arteries to the kidneys, and is treated by balloon distension of the artery or placing a stent in the artery. Ultimately, if we are able to better understand what damage occurs in areas of the brain controlling blood pressure, this may lead to the development of new treatments aimed at reversing some of this damage, thereby improving the blood pressure and the health of people living with cardiovascular disease.

What diseases interest you the most as a researcher?

As a basic scientist, there are many diseases that I see as “nature’s models” for scientific investigation, allowing us to understand disturbed physiology and compare it to normal physiology. It is only by understanding the two together will we be able to understand the processes that lead to pathophysiology. In order to undertake this work, I establish productive collaborations with clinicians, such as Prof David McKenzie, who provide us with patients with OSA.