Dr Scott Kim is a NeuRA researcher investigating the molecular biology of multiple system atrophy. Here he describes the effects of this rare but fatal neurodegenerative disease on the body and some of the new thinking about what causes it. 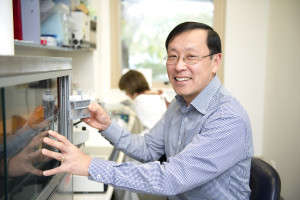 Multiple system atrophy (MSA) is a degenerative brain disorder that impairs the body’s involuntary functions, like blood pressure, heart rate, and bladder function. These processes are regulated by the autonomic nervous system. MSA also causes problems with muscular coordination and movement, like those seen in patients with Parkinson’s disease, and this is why MSA is often misdiagnosed as Parkinson’s disease. While the cause of MSA is largely unknown, studies point to a possible genetic component, as well as environmental factors capable of increasing susceptibility. MSA affects men and women equally and begins primarily in the 50s, although it can strike as early as in the 30s. The progression of disease is rapid and patients are confined to bed within five years of onset of symptoms. Death results within about nine years. There is no cure or effective treatment.

Diseased support cells in the brain

To tackle the problem of identifying what goes wrong in the brains of people with MSA, researchers study post-mortem brains from donors. The main finding so far is that there is a buildup of a protein called α-synuclein. Interestingly, this protein also builds up in other neurodegenerative illnesses like Parkinson’s disease and dementia with Lewy bodies; however, in MSA, the α-synuclein is deposited in cells called oligodendrocytes, rather than in neurons. This buildup can lead to serious problems within these cells.

What is different about oligodendrocytes? If neurons are the wires, oligodendrocytes are the plastic covering around them: they are support cells that help to insulate signals between neurons. Oligodendrocytes produce myelin, a fatty membrane that wraps around the axon fibres of all neurons in the brain. Without myelin, neurons eventually die. Thus there is a need to identify the molecular pathways that specifically lead to disease in oligodendrocytes. Recent progress in the study of how oligodendrocytes handle fats and manufacture myelin heralds a promising advance.

Striking a balance between fats

Research has found that before the α-synuclein aggregates are visible in the brain of MSA patients, myelin becomes structurally unstable. This provides a clue to the series of events that lead to the eventual brain damage in the disease. Myelin stability relies on a balance between the fats, or lipids, that it contains, particularly sphingolipids and cholesterol. Our team has recently found that the lipid transporter ABCA8 is increased in MSA brain and is likely to have a role in myelin processing and maintenance. These data provide strong impetus for investigation of myelin lipid dysregulation in MSA pathology. The next line of investigation is to see whether lipid dysregulation causes buildup in the ‘culprit’ α-synuclein.

New findings in the MSA brain

78% of myelin is made of lipids. However, we haven’t previously been able to measure whether there are changes in lipid levels or distribution in the MSA brain. Our team at NeuRA recently undertook a comprehensive analysis of MSA myelin. We measured three groups of lipids, sphingomyelin, sulfatide and galactosylceramide, which are all important in myelin integrity and function, in a region of the brain affected in MSA, the motor cortex. We also looked in a control region unaffected in MSA, the visual cortex.

For all three groups of lipids, most of the species were severely decreased (by 40–69%) in affected but not unaffected MSA brain regions. Based on this and other data we conclude that dysregulation of myelin lipids in the course of MSA pathogenesis may trigger myelin instability.

Lipid balance is increasingly recognised as a crucial factor for normal brain function and our data is among growing evidence that altered lipid levels and/or distribution contribute to a number of neurodegenerative diseases. Future studies into the unique lipid-related processes underlying MSA pathology could reveal molecular targets that could be exploited to regulate α-synuclein aggregation in oligodendrocytes, providing potential therapeutic avenues for the treatment of MSA.