Imaging techniques enable neuroscientists to learn about the structure and function of cells in the nervous system. Here, Dr Zoltán Rusznák shares some captivating images of the brain and how they were made.

Neurons are the building block cells of the brain and spinal cord, communicating with each other through synapses to regulate nervous system function. Relating the shape, size, and location of neurons to their function is important in understanding mechanisms in brain health and disease. However, because neurons are small, three-dimensional, and embedded among many other cells in the nervous system, special techniques are required to be able to see them. The following pictures show neurons in the cochlear nucleus, which is the part of the brain that decodes sound information from the ear.

Stacking up to localise sound 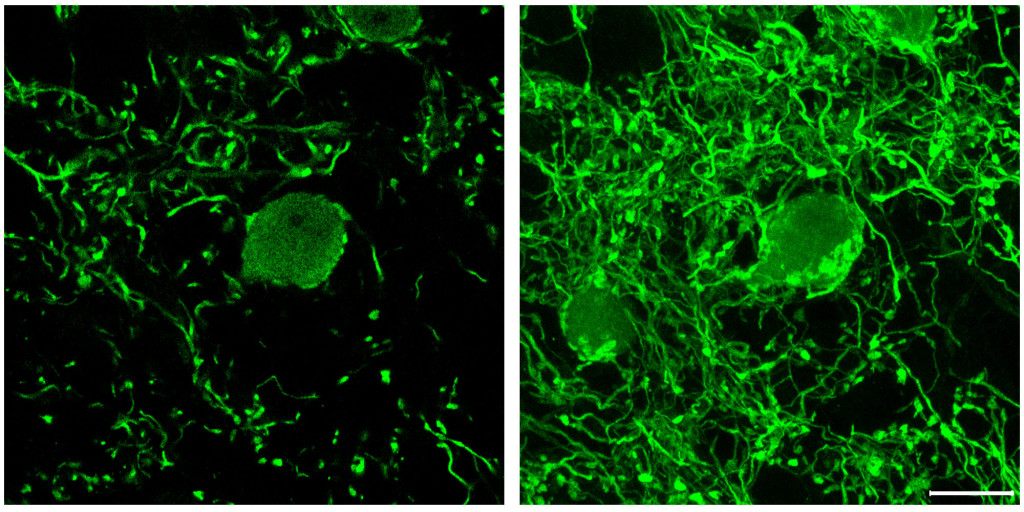 What’s in this picture? Globular bushy cells are neurons in the cochlear nucleus that act as sophisticated timing devices. They measure tiny delays in how quickly a sound reaches both ears, which is the basis of how we localise the source of a sound.

How was it made? The picture on the left was taken with a camera attached to a microscope. It shows a round bushy cell body in the middle of a single, very thin slice of brain tissue – a slice only 0.06% of the thickness of a grain of salt! The right-hand picture is a stack of 40 images taken from successive slices of the same piece of brain tissue – imagine a stack of salami coming out of a deli slicer. The image stack results in a view of much greater depth, so that a second bushy cell body becomes visible, as well as a detailed view of the synaptic nerve terminals, indicated by the several bright green structures on the cell bodies.

Putting the puzzle together 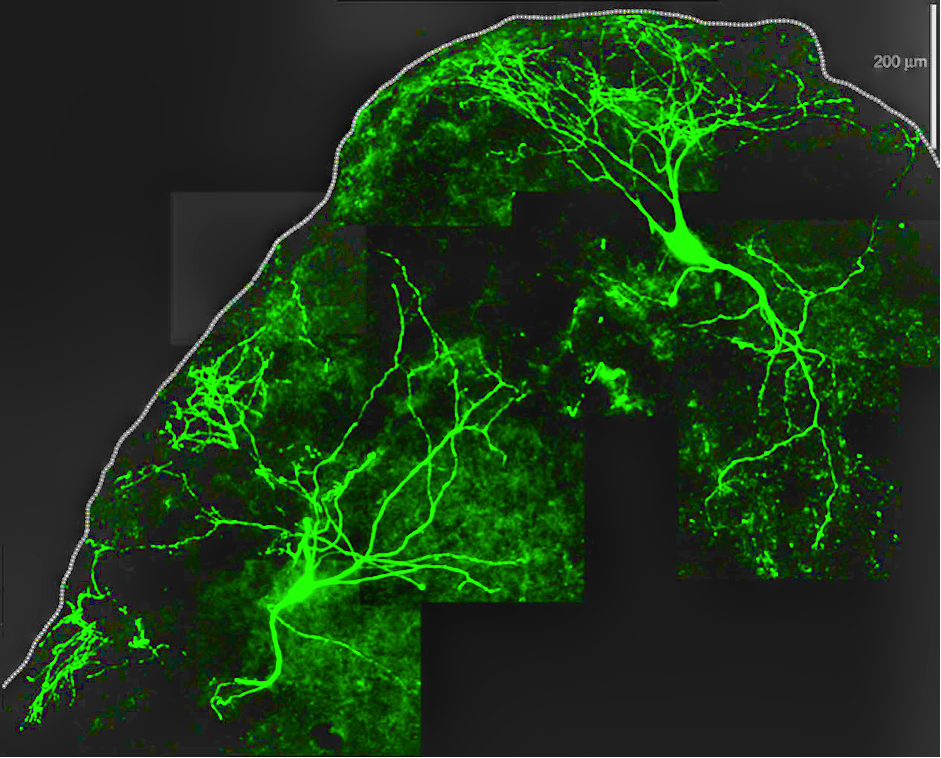 What’s in this picture? ‘Giant neurons’ of the cochlear nucleus receive sound information from the ear and help to localise the source of sound from a single ear.

How was it made? These pictures are also made from stacks of single images, like in the previous picture. However, since the giant neurons are so, well, giant, many adjacent image stacks have to be assembled like a puzzle in order to capture the many branching nerve endings. Each square in the pictures corresponds to a single field of view of the microscope.

What’s in this picture? These small round neurons in the cochlear nucleus are called granule cells. Neurons have proteins on their surface called receptors that respond to chemical messengers and transmit signals throughout the neuron. Sometimes we want to know the specific type and location of receptors that a messenger binds to in order to transmit its signal.

How was the picture made? Different fluorescent dyes are used to distinguish the receptor from the rest of the neuron. The left-most image shows green, bead-like dots that indicate the presence of a particular type of receptor called a muscarinic M3 receptor in a slice of brain tissue. The middle picture is taken from the very same piece of brain tissue, but the tissue is instead stained blue to define the nucleus of the granule cells. When the green and blue images are merged (right-hand picture), the green dots are showed to be surrounding the blue cell nuclei. This tells us that the receptors are located on the surface of the granule cells, and suggests that these receptors mediate the effects of certain neurochemical messengers in the cochlear nucleus. This information is helpful to determine how hearing works and what might go wrong in auditory disorders.