The effect underage drinking has on a developing brain is a question Prof Caroline Rae is seeking to answer. An alarming 19-23% of adolescents have binge-drunk in the last week, and this proportion is increasing in young females. 13% of all deaths in young Australians are a direct result of alcohol use, with alcohol use patterns in the young becoming more extreme. 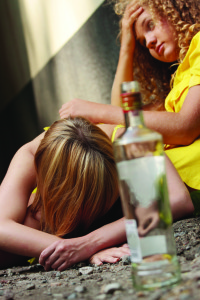 At this age, the frontal lobes of teenagers are still developing. This development progresses into the early 30s, but most occurs in the teenage years. Alcohol is very likely to be affecting the development of the brain and its connections. The recent trend to mix high-caffeine drinks with alcohol could be exacerbating the problem.

Currently, there is very little scientific evidence on the effects of early binge drinking. Prof Rae and her collaborator, Prof Maree Teesson at the National Drug and Alcohol Research Center (NDARC), aim to uncover what happens in a teenager’s brain when binge drinking occurs. They will then identify the neurocognitive consequences of binge drinking, such as whether it affects memory, the ability to recognise emotions on other people’s faces, or the ability to inhibit impulses. The structural and functional effects of binge drinking on the brain are also under examination.