Dr Nic Dzamko and Prof Glenda Halliday have put together an international team dedicated to researching the causes of Parkinson’s disease. They will be the first in the world to use valuable early clinical samples to identify the genetic and molecular underpinnings of this brain illness.

Parkinson’s disease is a debilitating neurodegenerative disorder with no current cure. It is estimated that 1 in 350 Australians are living with PD and 30 new Australians are diagnosed every day. Over the last 10-15 years, it has emerged that genes play an important role in the risk of developing Parkinson’s disease. Approximately 16 genes have now been identified that increase the risk of developing Parkinson’s disease. Understanding what these genes do in the healthy brain, and how their functionality might go wrong, has become a major focus in the search for clues about the cause of this disease. 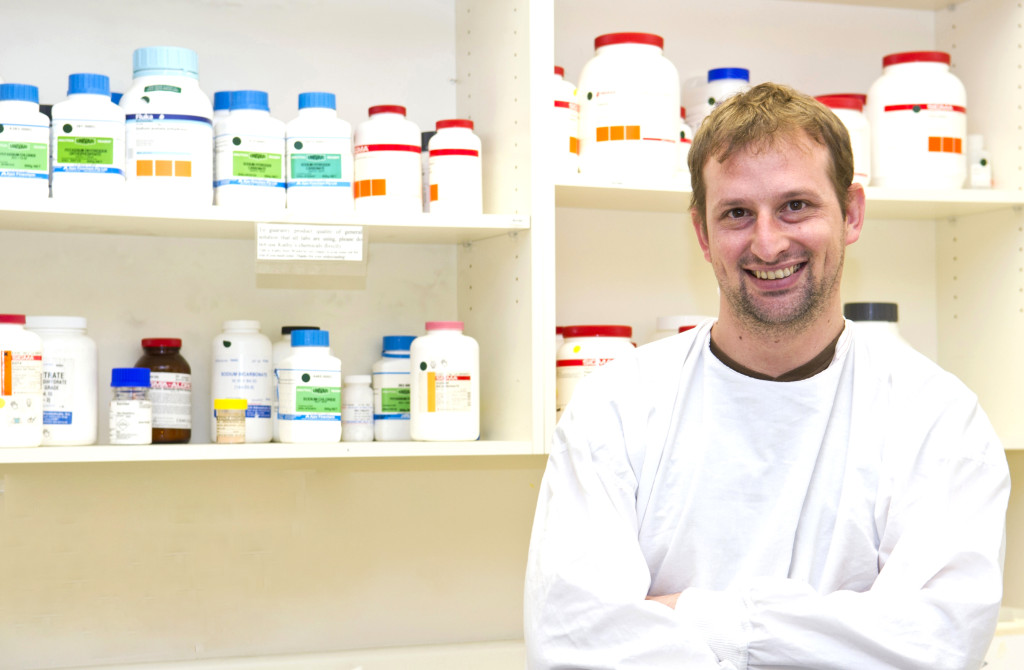 Dr Nic Dzamko in the laboratory

One of these genes, called LRRK2, has received considerable attention. The LRRK2 gene encodes a protein that belongs to a class of enzymes called kinases, which is interesting to researchers because many anti-cancer drugs developed by the pharmaceutical industry also act by blocking kinases. In the past few years, more than 20 drugs that can block the kinase LRRK2 have been patented. While it is hoped that these drugs may be beneficial for the treatment of Parkinson’s disease, more work needs to be done to understand exactly what LRRK2 does, and therefore whether drugs that block its action will be safe and therapeutically useful. To better understand the function of LRRK2, our team at NeuRA has initiated two new projects in collaboration with scientists from around the world.

The first project involves us leading a group of scientists from London, Tokyo, California and the Netherlands. Using 400 samples that have been sent to us from these locations, and that cover a range of brain regions at different disease stages, we will determine if, when and where the expression of the LRRK2 enzyme goes wrong in the Parkinson’s brain.

The second project aims to investigate the idea that inflammation is linked with Parkinson’s disease, in collaboration with researchers in the US and Europe. This project is particularly exciting, as it may identify much-needed markers of early disease. By working with the worldwide LRRK2 Cohort Consortium, established by the Michael J Fox Foundation for Parkinson’s Research, we have access to more and better samples to ultimately obtain more meaningful data. We will measure a range of biological markers associated with inflammation in serum and cerebrospinal fluid. By comparing the extent and type of inflammation in people who do and do not have certain genetic mutations, and between people with Parkinson’s disease and healthy controls, we will identify whether inflammation is an early sign of Parkinson’s disease. This world-first access to blood samples from people with a large genetic risk of getting Parkinson’s, but who do not yet have the disease symptoms, is a chance to try and identify potential treatments for the early stages of this illness.

These projects have taken about a year and over 300 emails to come together. Although meetings are often scheduled in the very early hours of the morning to accommodate time zones, working together as an international team to leverage skills and resources is an important step toward solving the problem of Parkinson’s disease. Of course, our work would not be possible without the funding we have received for these projects from the Michael J Fox Foundation and the Shake it Up Australia Foundation.