The life of an early career researcher

An early career researcher is an interesting creature – focussed, driven and often self-critical. Outgoing Chair of the Early Career Committee (ECC) at NeuRA, Kirsten Coupland, explains what it is like being a young scientist and the role the committee plays in supporting careers.

Early career researchers are those working in science who have completed their PhD less than six years previously or who are under the age of 40; whether studying or employed, involved in academia, or industry. There are around 120 early career researchers currently at NeuRA but this number fluctuates as people take exciting steps in their careers. These researchers are just discovering what a career in research entails. They are finding that a scientific career is not as structured as one in the corporate world; skills are learnt on the job and successful outcomes to experiments often initially elude them. Young researchers learn at the deep end. The work of the ECC, of which I am the outgoing Chair, is important for young researchers at NeuRA. We provide events and seminars that develop the skills and professional attributes young researchers need to cultivate a successful career in science.

What it takes to be a scientist

The world of research is extremely competitive and many of the things that set one scientist apart from the crowd are less tangible than research results. Being a good scientist requires the ability to communicate, have a strong network, a comprehensive knowledge base and confidence. 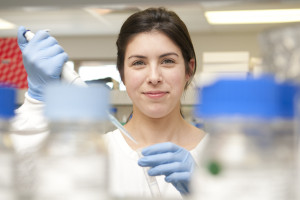 Kirsten Coupland in the laboratory

NeuRA’s ECC aims to give young researchers the ability to cultivate these assets and enjoy themselves at the same time. Events the ECC orchestrates encourage young researchers to interact with new people from different research groups. In doing so, they not only become confident at communicating their research to scientists from other fields, but they also start developing a network they will use throughout their career. Initiatives include regular seminars featuring speakers from around the country who discuss topics such as ethics, social media, and where to source funding.

Panel discussions of post-docs or non-academic science careers have helped get early career researchers thinking about what they will do with their scientific knowledge. Informal coffee meet-ups allow students to discuss their research with a mixed audience and interact with people they may not know at NeuRA. Early career researchers are the future generation of scientific research. It is important they have the skills and attributes necessary to carry out creative and exciting science that will revolutionise the way we understand the human body.