Cannabidiol – a glimmer of hope for Alzheimer’s disease?

Alzheimer’s disease is the most common form of dementia, which affects around 330,000 Australians. In 2009 – 2010, the healthcare cost of dementia was over 4.9 billion dollars in Australia. Both of these figures are on the rise, given that our life expectancy is increasing.

People living with Alzheimer’s disease experience a range of symptoms that include social withdrawal and problems with remembering places, objects and people, and these symptoms become progressively worse with time. In the brain, aside from the increasingly well-recognised amyloid plaques and tangles, imaging and post-mortem analyses have also found extensive neuronal degeneration, inflammation, toxicity and oxidative stress, and these processes are likely to contribute to the development of Alzheimer’s disease.

So where does one find a treatment that can exert neuroprotective, anti-oxidant and anti-inflammatory effects all at once? Well, the answer might lie in a compound known as cannabidiol. Cannabidiol has been shown to have all the above properties, which could be relevant for Alzheimer’s disease. However, there have been only a few studies that have followed up on this link, perhaps because many people might be eager to dismiss cannabidiol as a treatment due to concerns that it may exhibit the psychoactive properties of other compounds obtained from the cannabis plant. But in fact, cannabidiol is behaviourally inactive in humans when taken over long periods of time, including in people with schizophrenia and Huntington’s disease. Cannabidiol also prevents the memory-impairing effects of THC, the main psychoactive compound of cannabis. And, in promising news for Alzheimer’s research, cannabidiol has also been shown to reduce amyloid production and increase neurogenesis in brain cells. With this in mind, it is only logical that cannabidiol should be tested for its potential to benefit those with Alzheimer’s disease, as it might counter some of the main biological changes that are occurring. 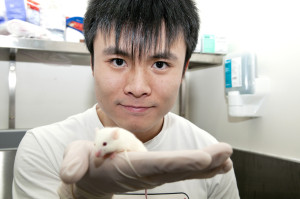 David Cheng has just completed his PhD at NeuRA under the supervision of Dr Tim Karl.

My study, published in the journal Psychopharmacology, was the first to investigate the effect of cannabidiol treatment in a transgenic mouse model of Alzheimer’s disease. This mouse model carries two genetic mutations that are associated with familial Alzheimer’s disease, and the mice show behaviours that are relevant to Alzheimer’s symptoms, such as social recognition and spatial memory deficits. Since normal mice have a tendency to explore either new things or other mice, we compared how well transgenic mice fared in a test called the social preference test, which measures the amount of time that the test mouse spends exploring either a familiar or a new (never before seen) mouse. I discovered that the Alzheimer’s model mice spent the same amount of time exploring both the new and familiar mice, showing that they were unable to tell the difference between the two. Excitingly, daily cannabidiol treatment given over 3 weeks restored the social recognition memory of the transgenic mice.

In a separate study, soon to be published in the Journal of Alzheimer’s disease, cannabidiol was given to the transgenic mice every day, beginning at a very early age, to test whether it can be administered early as a prevention against the social recognition memory deficits. Promisingly, the development of recognition deficits in the disease model mice was prevented by the cannabidiol treatment. Using various biochemical techniques, I also found evidence to suggest that this effect might be mediated by the anti-inflammatory properties of cannabidiol.