Building blocks for a fresh understanding of schizophrenia

Dr Dipesh Joshi received this year’s Leslie Kiloh paper award for his work into the understanding of schizophrenia. Since then, he has published new work linking problematic neurons to a genetic abnormality associated with schizophrenia.

He explains how his work has created a greater understanding of this disease.

Genes are a precious gift that every generation passes on to the following one since the existence of mankind. Abnormal functioning of some of these genes may lead to abnormal functioning of the brain cells leading to development of brain disorders. NRG1 and ErbB4 are two such genes that have been identified as ‘schizophrenia risk genes’.

Altered functioning or signaling of these genes contributes to the development of schizophrenia. Research shows that there are physical differences in the brains of people with schizophrenia compared with those of healthy people. To identify how genetic abnormalities lead to such physical differences remains a significant challenge. If this was known, we would be closer to understanding exactly what happens in the brain to cause the symptoms of schizophrenia, such as social withdrawal, difficulty with memory and planning, and even hallucinations, all of which can be very distressing to an individual with the illness.

What drug treatments are available now?

These days, the available antipsychotic treatments are relevant only for positive symptoms such as hearing voices, suspiciousness, feeling as though you are under constant surveillance, delusions, or making up words without a meaning, but not for negative symptoms which might include social withdrawal, cognitive deficits, difficulty in expressing emotion and an inability to feel pleasure. This highlights the urgency of having new antipsychotic drugs that have beneficial effects in treating negative symptoms and cognitive deficits in people with schizophrenia.

What are the risk genes doing in schizophrenia? 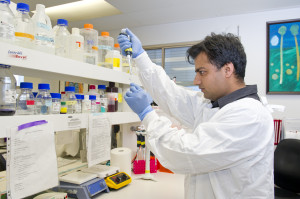 Dr Dipesh Joshi is a postdoctoral research officer at NeuRA

Our recent research work has been able to link schizophrenia risk genes (NRG1 and ErbB4) with a type of brain cell which maintains the inhibitory-excitatory balance in a normal brain. In schizophrenia, this particular brain cell-type, called inhibitory interneuron has been found to be reduced compared to healthy individuals. Research conducted in our laboratory is completely unique as it shows how an increase in the risk gene (ErbB4) is linked with a reduction in inhibitory brain cells. Increased levels of ErbB4 gene contributes to the inhibitory-excitatory imbalance resulting in development of schizophrenia.