Dr Muireann Irish uncovers the part of the brain that underpins social cognitive deficits in semantic dementia, further unraveling mysteries behind the disease.

It may sound like the subject matter of a science fiction movie, but mind-reading is a process in which we regularly engage. On a daily basis, whenever we interact in social scenarios, we go beyond our own perspective to infer the thoughts, beliefs, and feelings of other people. This innate skill to appreciate perspectives distinct from our own allows us to function effectively within the social world. For example, we can instinctively understand how a colleague may feel when their latest publication is rejected, or we can intuitively place ourselves in a friend’s shoes when they experience a joyous event like the birth of a first child.

My latest study sheds light on the brain regions that need to be functional in order to support this ability to empathise with others. The study, published in the journal Brain, reveals that structures in the right hemisphere of the brain are essential to enable us to read the minds of others and to consider their beliefs and feelings. ‘Theory of mind’ is the term used to refer to our uniquely human ability to make these inferences and is crucial for our successful functioning in the social world.

By understanding that other people think and feel in ways that are distinct from our own perspective, we can appreciate differences between individuals. This capacity to infer the mental state of others confers immense flexibility in our approach to various social scenarios. Without this ability, we would appear rigid, egocentric, and unfeeling towards others.

While appreciating the mental state of others may come relatively easy to us, the capacity for theory of mind relies upon a complex network of structures in the brain. Research on healthy individuals has revealed that when we successfully consider another person’s psychological perspective, regions in the frontal, temporal and parietal lobes of the brain activate. Such widespread brain activation reveals how complex this function truly is.

It follows that damage to any one of these brain regions will block the capacity to take another person’s perspective. Theory of mind abilities are disrupted across a number of clinical conditions such as traumatic brain injury, autism, and dementia.

In frontotemporal dementia, it is commonly reported that patients are unable to understand how their actions affect other people, or to consider that the reactions of others may differ from their own. However, up until recently, we knew relatively little regarding the capacity for theory of mind in the syndrome of semantic dementia. My recently published research reveals, for the first time, that individuals with semantic dementia experience severe difficulties in considering the mental states of others, and that such deficits are attributable to atrophy of structures in the right hemisphere of the brain.

Semantic dementia is a subtype of frontotemporal dementia, characterised by the progressive loss of general knowledge about the world. It is conceptualised as a language disorder whereby patients experience a profound loss of the meaning of words and concepts. The patient is unable to recall the names of objects, places, people, and experiences difficulties in correctly labeling popular musical tunes, or basic emotional expressions. While the predominant complaint of the patient is that of language disruption, carers of patients with semantic dementia report alterations in social functioning and interpersonal behaviour. 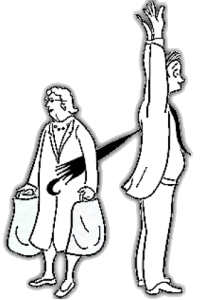 I used a new task to explore if patients with semantic dementia could infer the thoughts, beliefs, and feelings of the main characters in humorous cartoon scenarios. Patients were asked to describe why a selection of cartoon scenes were funny and their descriptions were analysed for language that reflected consideration of different mental states, for example “he thinks”, or “she feels”. In the cartoon scene to the left, a correct answer would be something like, “The gentleman thinks he is being held up. The lady is not aware that she is frightening the man.”

Using neuroimaging analysis of structural MRIs, I found that shrinkage of the right temporal lobe of the brain underpinned the theory of mind deficits in semantic dementia. This finding is surprising, as these patients are typified by damage to the left side of the brain. As the disease progresses however, pathology spreads from the left to the right hand side of the brain. The semantic dementia patient displays impairments across multiple domains, beginning with language disruption and gradually progressing to include social dysfunction.

Why is this important?

The findings of this study are unique as they reveal, for the first time, that degeneration of right temporal regions in the brain is associated with social dysfunction in semantic dementia. The right temporal lobes have been consistently implicated in studies of social functioning in healthy individuals.

Our study illuminates the complexity of social cognition and how we achieve sophisticated acts of social inference in our everyday lives. By incorporating brain mapping techniques with new experimental tasks, we can continue to unravel the mystery of mind-reading and build a coherent picture of how humans navigate within the social world.