Of squiggly lines and schizophrenia

I am relatively new to schizophrenia research, so I was surprised by the sheer diversity of people I have met who have schizophrenia – men and women from a wide variety of backgrounds with distinct personalities who don’t conform to any particular stereotype. While the disease affects them in different ways, however, they have all described the significant challenges that schizophrenia has posed for them and their families.

Schizophrenia is a neurodevelopmental disorder that typically begins during late adolescence or early adulthood. Healthy development during adolescence involves large-scale reorganisation and restructuring of the brain, including changes to the delicate excitatory/inhibitory balance of the brain’s neurotransmitter systems and underlying brain structure. This process seems to go awry for people with schizophrenia. Environmental factors like stress also appear to contribute to the onset of the disease. 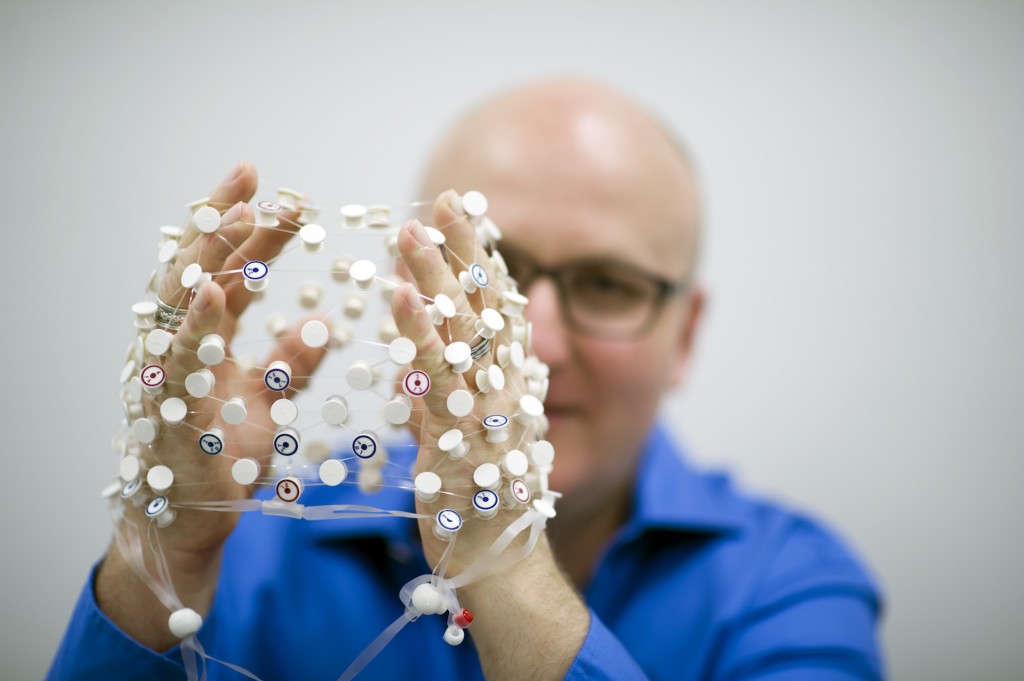 Dr Jason Bruggemann holds an EEG ‘net’, made up of wires and electrodes.

We know that early diagnosis and treatment can significantly improve long-term outcomes and help minimise the damaging effects of schizophrenia. Hence, current research is focused on potential ways of identifying children at risk of developing schizophrenia. Our colleague Dr Kristin Laurens and her team from Kings College London are currently evaluating a combination of factors as potential early markers, including subtle peculiarities of speech and movement, lower IQ and poorer academic achievement, disturbances in social, emotional, and behavioural functioning, and subclinical psychotic-like experiences such as occasionally hearing voices that nobody else can hear.

At NeuRA, we are conducting research into another potential marker of schizophrenia risk called the mismatch negativity (MMN). The MMN is an index of the brain’s electrical response to changing patterns of sounds. It’s derived from a measure of the electrical activity of the brain called the electroencephalograph (EEG), more commonly known as ‘brainwaves’. The raw EEG signal may look like just a bunch of squiggly lines running across the computer screen but, once analysed, the resulting data can help us better understand patterns of normal and abnormal brain function.

The squiggly lines of a raw EEG read out.

In adults with schizophrenia, the size of the MMN has been related to disease severity, ability to function in the wider-community (functional outcome), and grey matter volume loss in the frontal and temporal brain regions. The MMN is usually smaller in adults with chronic schizophrenia compared with typical individuals. In light of this, we recently investigated whether a group of children who may be at increased risk of schizophrenia (based on having some of the risk factors described above or having a first-degree relative with schizophrenia) also have a smaller MMN relative to typically developing children.

Our results showed that although the MMN exhibited by the children at risk of schizophrenia was unlike that of their typically developing peers, it also differed from the smaller MMN observed in adults with schizophrenia. In fact, we found a relative increase in the MMN over the frontal brain region, rather than a decrease!

“If we can reliably identify at-risk children then perhaps we can reduce the burden of schizophrenia for future generations.”

It was difficult for us to interpret this result in the context of what we know about MMN in adults with chronic schizophrenia. We looked at MRI data from an overlapping sample of children, which revealed differences in grey and white matter volume in the same brain regions that produce the electrical activity seen in the MMN. Also, the developmental literature indicates that the MMN tends to be larger in young children compared to adults. This has led us to speculate that perhaps the ‘at-risk’ children are on a different developmental trajectory than their peers. It is possible that this unusual MMN result may reflect the complex interplay between developmental changes and the factors placing these children at higher risk of developing schizophrenia.

It’s essential to conduct long-term follow-up of these potentially at-risk children to establish who goes on to develop schizophrenia and how their MMN changes as they mature. This follow-up work, being completed by our colleague Dr Kristen Laurens, will tell us whether the increased MMN we found in this study may indeed be a useful way of identifying children at risk of developing schizophrenia.

The unique people with schizophrenia that I have met currently live their lives as best they can despite the challenges raised by this condition. If we can reliably identify at-risk children then, with appropriate early treatment, perhaps we can reduce the burden of schizophrenia for future generations.