Welcome to the new Margarete Ainsworth Building | the NeuRA blog

After many months of construction, not to mention anticipation, we have officially opened the new Margarete Ainsworth Building at NeuRA (Neuroscience Research Australia). 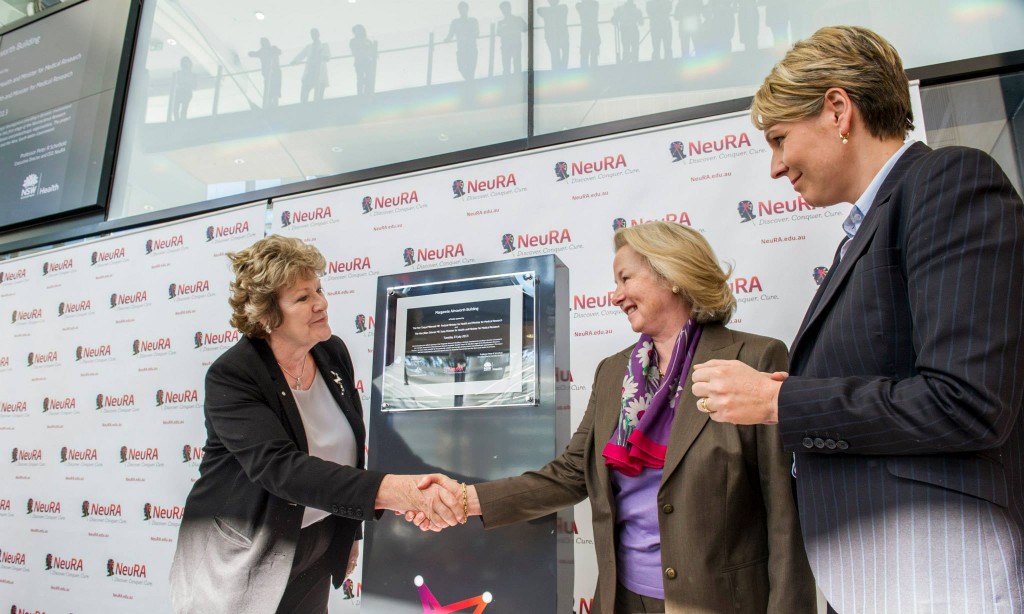 As NeuRA chairman Paul Brassil said in his speech, Margarete Ainsworth has been exceptionally generous to NeuRA and “we thank her most sincerely for her trust and confidence in NeuRA’s research capacity”. 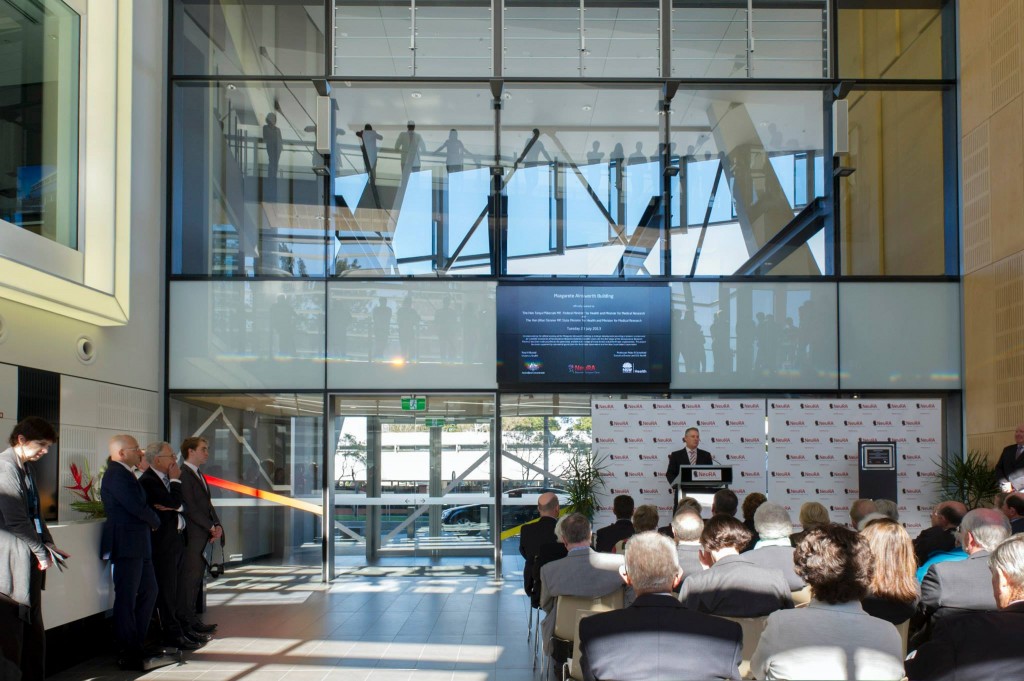 The official opening of the Margarete Ainsworth Building at NeuRA

Lucille Bloch, whose husband Keith had frontotemporal dementia and was a research participant at NeuRA, reminded us in her speech what this new building is all about: the power of research to find answers to devastating diseases of the brain. I’ve pasted a copy of Lucille’s speech below for those who couldn’t make it to our opening.

Here’s to a new era of discoveries at NeuRA. 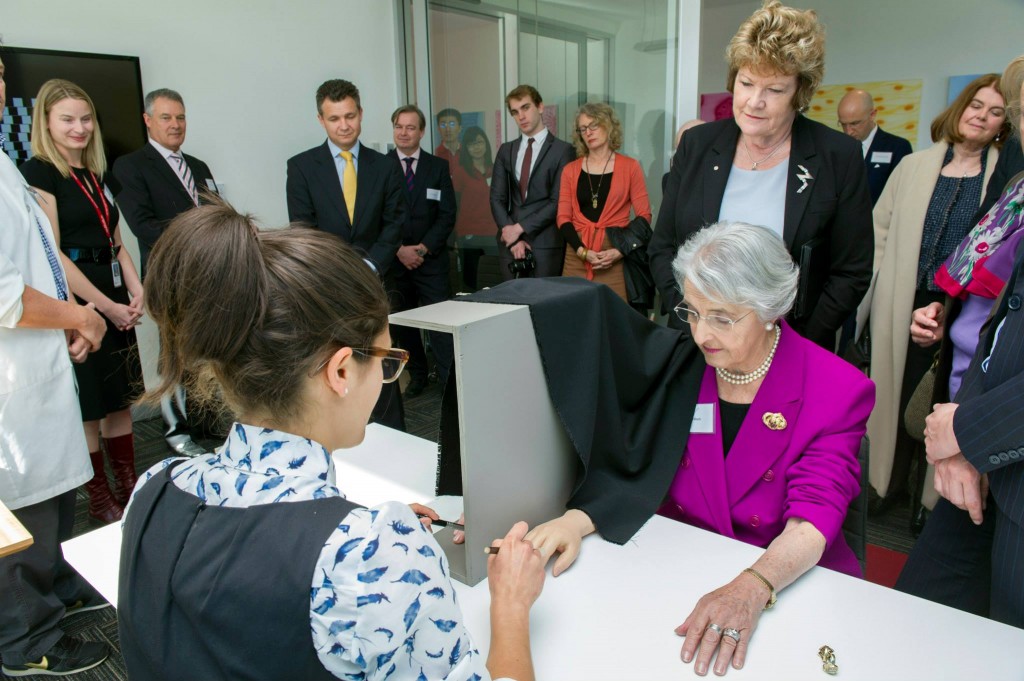 Lucille Bloch, a carer and research participant at NeuRA, participates in a demonstration of using illusion to relieve pain.

“My husband Keith was always an easy person. We had a very good relationship; we shared everything, we respected each other.

In the year 2000, we decided to pack up our life in Israel and move to Australia to be with our three sons. It was around this time that I noticed changes in Keith’s behaviour.

What stood out for me was his inability to pack up his beloved hobby workshop before emigration. Eventually I had to do it myself. I’d never held a spanner in my life, and here I was dismantling everything, with Keith just watching. This was totally out of character for him.

I said to myself, why is Keith so different? And as I said ‘different’, I stopped. I felt very concerned, because I remembered what my father, a GP, had said about my mother when he suspected she had Alzheimer’s disease; that her behaviour was different somehow to what it had always been.

Shortly afterwards, I spoke to our GP, but he brushed aside my concerns. The next three years were heartbreaking and very difficult as I watched Keith behave in ways that were so out of character for the man I knew. Finally, a neurologist sent him for tests and gave us a diagnosis: Keith had frontotemporal dementia.

When we first arrived in Australia, Keith still loved to tinker in his workshop, but it became evident quite quickly that it was becoming dangerous. He had lost physical coordination and the ability to forward plan, so there was no more sawing, no more using his electric tools.

I had to just follow Keith’s deterioration, trying to accommodate it. Initially I would lay out his clothes for him in the morning. When he could no longer easily manage, I thought of ways of folding and tying his clothes to help him dress himself for just that little bit longer.

Keith’s deterioration was rapid. He had many falls. I managed most times to pick him up, but about a year after diagnosis, he needed a wheelchair. I was determined to care for Keith at home. It was difficult, but somehow if you want to, you do it.

He attended day centres, I took him to the Art Gallery, out for coffee and had our children and grandchildren share meals with us. After dinner I changed and settled Keith using a hoist to lift and move him.

He never lost his memory or his ability to feel and understand emotions. At the day centre, Keith would write cards to me. They were mostly illegible, but the staff asked him what he had written and told me.

I have one of the cards here with me today, and it says: “Dear Lucille, thank you for being the Mother of my children. Love, Your Husband”.

As you can see, he may have lost many things, but he was still the same loving husband.

During this time, I attended a presentation by Professor John Hodges from Neuroscience Research Australia about the need for brain donation and the great value it has for research. The idea grabbed me.

I went home that night and discussed it with Keith, suggesting we could both donate our brains. Keith agreed immediately. He said, ‘We’ve got four children, your mother had it, now I’ve got it. Let’s do it and let’s help other people.’ We discussed it with our children, they agreed, and thus our bond with NeuRA began.

I brought Keith regularly to NeuRA for cognitive tests and MRI scans. At all times, Keith was treated with dignity and respect. I too have been attending this amazing research institute for regular tests.

When I felt that he was going, I gathered all my four children. Even two of the grandchildren were there, aged just nine and six. The grandchildren always knew that gramps had dementia; we didn’t want to hide anything.

That last night, we put him to bed and I sat beside him and said, let’s talk about our life, and you squeeze my hand if you remember. So we’d talk about where we had lived, our children, and he kept squeezing my hand.

Keith passed away at home, with me at his bedside holding his hand. We called the Sydney Brain Bank and, with great dignity and sensitivity, they took my Keith and arranged for his brain donation without any disruption to the funeral plans.

Afterwards, Professor Hodges and his team told me that Keith had suffered from both frontotemporal dementia and also, unexpectedly, from Alzheimer’s disease. It is rare for these two diseases to occur together, and they said they would learn a tremendous amount from studying his case.

My dream was to have Keith’s dementia reversed. Realistically, however, both Keith and I would be well rewarded if participation in research here at NeuRA, together with our brain donations, advances knowledge about this horrible disease.

My vision for the future is a world where there is a cure for dementia in all its forms or at least medication that will arrest it.

I want those people who will unfortunately follow my husband Keith down the same path of dementia to have hope.