Things that go ‘snort’ in the night: Towards effective new therapies for sleep apnoea | the NeuRA blog

Things that go ‘snort’ in the night: Towards effective new therapies for sleep apnoea

I remember the first time I saw someone stop breathing during sleep. After a prolonged pause they suddenly gasped for air only to fall back asleep and stop breathing once again. Like me, if you have ever witnessed someone suffering from obstructive sleep apnoea (OSA), it’s hard to imagine how these individuals can function at all during the day given how disturbed their sleep can be.

This common condition affects 5-10 % of the adult Australian population. The reason someone with OSA stops breathing during sleep is that they cannot get enough air through their upper airway, which narrows and collapses repetitively (somewhere between the back of the nose and the throat area) despite ongoing efforts to breathe. This leads to low oxygen levels and fragmented sleep. Not surprisingly, the most common symptom of OSA is daytime sleepiness. Untreated OSA is associated with major adverse health outcomes including increased risk of cardiovascular disease, neurocognitive impartment and mortality. 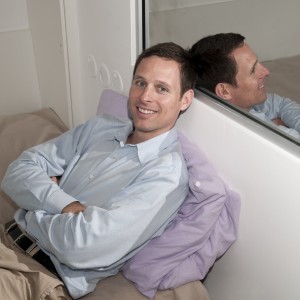 Most of the people I have studied in the sleep laboratory have been treated with the first line therapy for OSA called continuous positive airway pressure therapy (CPAP). CPAP is highly effective in treating the breathing disturbances of OSA. For many of the people I have seen, however, CPAP treatment is unacceptable or they can’t tolerate it – in fact, this is the case with 50% or more of OSA patients. Secondary treatment options, including mandibular advancement splints or surgery, have variable efficacy and responses to these forms of therapy are currently unpredictable. I have certainly met many patients who have tried one or more of these therapies without success and, not surprisingly, are desperate to find effective alternatives.

Given the burden of disease and its consequences, we urgently need new treatments and a way of accurately determining who will respond to existing secondary treatments for OSA. To do this, we need to improve our understanding of the causes of OSA.

Findings from a landmark study conducted by my colleagues and I during my NHMRC supported post-doctoral studies at the Brigham and Women’s Hospital/Harvard Medical School in Boston, USA revealed that the causes of OSA vary substantially between patients. We studied 75 individuals overnight on three separate occasions as part of a detailed 5-year study investigating the causes of OSA.

While all of the OSA patients we studied had some degree of anatomical compromise (a predisposition to upper airway collapse), we also found other non-anatomical traits in the majority of our OSA patients that are likely to be an important contributor to their disease. These include ineffective upper airway muscles, waking up too easily and unstable brain control of breathing.

Given the number of different factors contributing to OSA that we observed, future research should focus on developing a ‘personalised medicine’ approach to treat sleep apnoea; in other words, looking at the specific causes of OSA on a per patient basis and focusing new and existing therapies on these specific causes.

While we still need to do further interventional work, these findings imply that over half of all OSA patients could potentially be treated without CPAP using a single or combination of therapies directed at the abnormal trait(s). To this end, we are conducting several studies in people with and without sleep apnoea at NeuRA to investigate the causes and consequences of sleep apnoea, as well as studies aimed at developing new treatment options for patients.