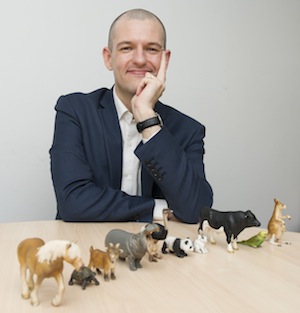 Dr James Burrell researches frontotemporal dementia. One of the symptoms of this type of dementia is forgetting language and words, which can be tested by asking a volunteer to name toy animals.

Frontotemporal dementia (FTD)  is the second most common degenerative disease causing dementia in younger adults, with onset typically occurring in the 50s or 60s. In FTD, damage to brain cells begins in the frontal and/or temporal lobes of the brain, which often results in personality and behavioural changes or losing the ability to speak or understand language.

When conveying a new diagnosis of frontotemporal dementia the clinician almost invariably encounters the following questions “Why has this happened?” “Is there any treatment?” and “Will our children get it?”.

Recent discoveries of genetic causes in familial FTD have given us a much firmer handle on the last question, and have undoubtedly shed light on the cellular processes leading to the death of brain cells in people with familial FTD. Nonetheless, we still know little about causation in non-familial FTD, which accounts for around 90% of cases. Without a clear understanding of these processes it is hard to visualise the development of an effective treatment for this devastating disease.

The study offers a tantalising clue but much remains to be understood. Is this apparent increase in autoimmune disease only true for one of the pathological processes that underlie FTD? If so, could measuring inflammatory blood markers help identify individuals with that pathology in other FTD subtypes, where the pathology is more varied? What is main determinant in non-familial disease: autoimmunity or systemic inflammation more generally? What is the relationship between FTD pathology and autoimmunity: which is the chicken and which the egg? Could immune modulation offer a route to disease modification? We hope that this important paper opens the way to a more complete understanding of the processes underlying neurodegeneration in FTD and the development of new therapies, which are needed desperately to halt the progression of this dreadful disease.