When I tell people I manage a Brain Bank they usually look quizzical and joke about making deposits and withdrawals. The reality is, they’re not so far from the truth. People make the decision to donate their brain for medical research every day and when they do, a Brain Bank is where their brain goes. We have over 850 brains from generous individuals who have recognised the need to better understand the cause of diseases such as Alzheimer’s disease, Parkinson’s disease and frontotemporal dementia. Currently, the only way we can study the fine-scale changes that occur in these diseases is by studying brain tissue after death. 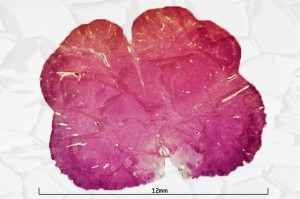 A small section of brain tissue, stained to reveal particular structures or the presence of certain chemicals.

When tissue arrives at the Sydney Brain Bank it goes through a thorough examination to determine whether the donor had a brain disease and if so, how widespread and severe it was. Only by doing this can we classify large numbers of similar cases required for meaningful research. Once the tissue is characterised, it’s stored by us and made available for approved scientists to carry out scientifically valid and ethical research projects. All scientific applications are independently reviewed by a panel of experts in the field to ensure the tissue is contributing to world-class research. 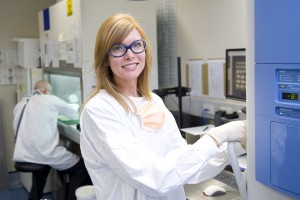 Me in the lab

If the donor suffered from a neurodegenerative disease it’s often also comforting for the family to have confirmation of the reason for their physical or cognitive decline. However, the overall reason for becoming a brain donor is purely altruistic and stems from a desire for others not to have to suffer from these conditions. Every donation we receive (of a brain or funds) is achieving this outcome, with over 17 national and international scientific research projects facilitated by the donation of tissue to the Sydney Brain Bank in 2012 alone.

Dr Claire Shepherd is the Manager of the Sydney Brain Bank and is currently working with the NeuRA Foundation to help raise funds for this important facility.  Not many people are aware of why brain banks are so important, and even fewer people know that it takes a surprisingly large amount of money to carefully store, process and handle the precious brain tissue that is generously donated.