Mapping the brain’s map of the hand | the NeuRA blog

Mapping the brain’s map of the hand

No two strokes are the same. How a person is affected by a stroke is dependent on a range of factors such as the type of stroke, the part of the brain damaged, and their health before the stroke.

Many stroke survivors have trouble manipulating and holding objects, and the way people hold and manipulate objects is something NeuRA’s Dr Ingvars Birznieks is an expert in. Dr Birznieks studies tactile receptors (features in our skin that respond to touch) in the fingers and the way the brain controls our hands.

He is interested in tactile receptors for two reasons: (1) a complete understanding of these receptors means that we can measure how they are affected by different diseases and disorders; and (2) only once you understand human tactile receptors can you then engineer robots and prostheses that have the same functionality as the human hand.

Dr Birznieks recently published a case study where he systematically applied fine-scale methods of non-painful touch to 25 points on the affected hand of a stroke survivor. Only with an experiment like this can we begin to understand what information is being felt by the hand (‘I was just touched’), sent to the brain (‘Excuse me brain, the index finger is claiming to have been touched’) and then sent back to the hand (‘Yep, index finger was touched – move index finger’).

In essence Dr Birznieks wanted to work out whether stroke changes the brain’s map of our hands.

To do this Dr Birznieks developed an experiment whereby the patient could not see their hand or the stimulus, and instead had to rely on information collected by tactile receptors in the hand alone to work out the exact point on the hand being touched. After each point was touched the patient was asked to indicate on a drawing of the hand where it was felt. 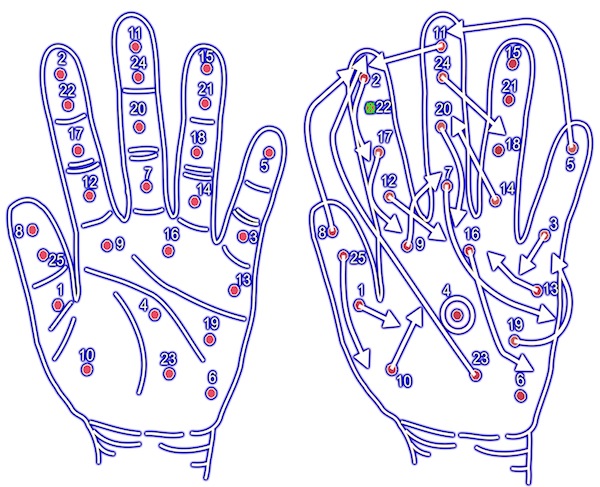 Of the 25 locations tested, the patient correctly identified the location of the touch in one instance only. Instead, when a finger was touched the patient sometimes felt the touch in the palm, adjacent fingers, or a different spot on the same finger.

The hand on the left above indicates the 25 test sites used. The hand on the right shows the brain’s inaccurate map of the hand following stroke. Arrows originate from the centre of each test site and terminate where the stimulus was felt. Note: Site 4 was the only site where the stimulus was felt exactly where it was applied; site 22 was not felt at all; and sites 6, 15, 18 and 21 were felt but could not be localised with any confidence.

In neurophysiological circles this kind of problem is referred to as a somatotopic mismatch. Dr Birznieks is now testing more stroke survivors and suspects that this problem is actually a common one and may explain why many stroke survivors continue to have difficulty holding and manipulating objects long after rehabilitation.

Ben Bravery is a science communicator and writer at NeuRA.