You know the word…it’s right there…on the tip of your tongue…and…it’s gone again. Argh!

Struggling to think of a certain word is something everyone encounters. For a specific group of dementia patients, however, this is a daily battle and often involves words for common household objects previously well remembered (e.g kettle). Semantic dementia is a disease that attacks language in people in their 50s to 60s while other cognitive skills like attention and memory remain good. For people with semantic dementia, difficulties with words go beyond just thinking of a word to also recognizing the meaning of words they hear in conversation. There is no cure for this disease, however evidence is now emerging to suggest that with practice, patients can re-build certain vocabulary. 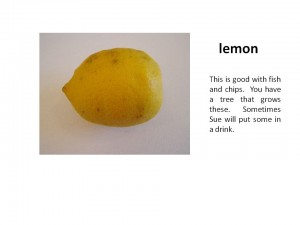 An example slide used in the training program.

My recent study investigated the effect of a simple daily word program, set up on the home computers of four people with semantic dementia, who ranged from mild to severe. The results took us by surprise and are extremely exciting because we found that:

This study provides another example of the potential for ongoing learning, not only in later life but also in the context of disease, such as dementia. Further still, it shows that improvements are possible even for patients with severe and advanced difficulties.

Sharon Savage is a Clinical Neuropsychologist and PhD student with the FRONTIER group at NeuRA.