Was Michelangelo depicting lead neuropathy in The Creation of Adam?

We are all exposed to environmental sources of lead, particularly from the combustion of lead-based fuels, manufacture of lead-acid batteries, crushing and smelting of lead, and the rapidly expanding technology industry. And as the culturally-inclined are aware, the use of lead-based pigments facilitated the most inspiring paintwork during the renaissance era. 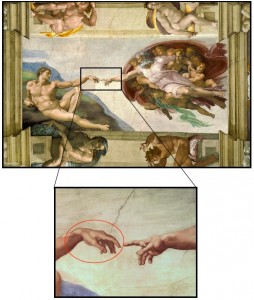 Wrist and finger drop as a manifestation of lead motor neuropathy, seen here in Adam’s distal extremity in The Creation of Adam by Michelangelo on the ceiling of the Sistine Chapel.

Amongst these, are the magisterial frescoes of the Sistine Chapel in Vatican City, particularly the epic artwork on the ceiling by Michelangelo that took 4 years to complete. Had we a copy of Michelangelo’s CV, I’d say Neurologist would be listed amongst sculptor, painter, architect, poet and engineer because the ‘drooping’ posture held by Adam’s outstretched wrist and fingers in The Creation of Adam (the most acknowledged piece on the ceiling) is the more common and early clinical manifestations of subacute lead motor neuropathy. Whether it was intentional or purely an inspired moment of appreciation for the dystonic form on Michelangelo’s part, I can’t help but humor myself over the irony of this painting being completely surrounded by other lead-laden artwork.

Back to the science, despite our environmental exposure, lead neuropathy remains rare and confined to workers in industries that use lead or in which lead is a by-product. The main routes of exposure are by ingestion and inhalation, although lead can be absorbed through the skin. Lead is toxic to multiple organ systems (haematological, gastrointestinal, renal, and hypertension) with isolated lead neuropathy being very uncommon. And because of this, our understanding of its pathophysiology has been rather poor.

Before 1970, many houses in Australia were painted with lead-containing paint, and renovations of these buildings placed people at risk including occupants, building contractors and neighbours. In our recent paper, we describe a case of a male who after undertaking paint-strip work on a century-old house, developed subacute lead neuropathy with progressive distal upper limb weakness without other systemic features. We used nerve excitability techniques that allowed assessment of biophysical axonal properties, and the results demonstrated impaired energy-dependent processes, likely ascribed to failure of the Na/K ATPase membrane pump and subsequent membrane depolarization.

Interestingly, similar clinical and excitability changes are observed in neuropathy secondary to acute porphyria and in fact, lead interferes with the heme metabolic pathway, in a manner similar to porphyria with the accumulation of heme precursors (aminolevulinic acid) that may subsequently affect the Na/K pump function. This raises the possibility that acute neurotoxic effects of lead may be related to elevated levels of porphyrin metabolites rather than a direct effect on peripheral nerve function.

This study has provided novel insight into the pathophysiological mechanisms underlying the development of neuropathy following lead exposure. In addition, it also illustrates that neuropathy may occur as an isolated manifestation of lead toxicity and highlights the vulnerability of the peripheral nervous system to lead intoxication.

Dr William Huynh is currently completing a PhD investigating the mechanisms of neuroplasticity following stroke in human patients in the Kiernan Group at NeuRA.