The people behind DIAN

This month we have sent out an appeal letter in which Chontell Johnson tells her story. Chontell’s mother had the genetic form of Alzheimer’s disease and Chontell made the decision to have predictive testing some years ago. She found out that she carries the form of the gene responsible for causing Alzheimer’s disease in her family. Other family members have developed symptoms between the mid-30s and the mid-50s, so this was a blow, to say the least. However, Chontell has set an example to us all in grasping the future with both hands and making every day count. She is a participant in the DIAN study (Dominantly Inherited Alzheimer Network) and her ever-cheerful involvement provides a great motivation to us all to get on with our research, which we hope will include trials of preventive drugs beginning next year.

We now know of over 20 families in Australia with hereditary Alzheimer’s disease in which a genetic mutation has been discovered. The first thing everyone thinks about is “can I be tested?” followed a few seconds later by “should I be tested?” Until there is a preventive drug, this is a very individual decision.

So far the family members who have asked for predictive testing have mostly done so either so they can use the information to plan their lives, or because they just can’t sleep without knowing whether they are carrying the family gene or not. 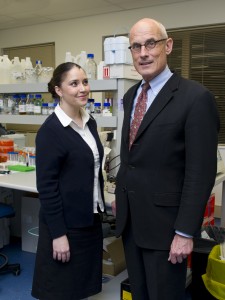 These families are very rare, but because they have a known cause for their family condition, they are able to contribute hugely to our understanding of what happens in Alzheimer’s disease. The DIAN study, an international collaboration led by Professor John Morris and Professor Randy Bateman of Washington University in St Louis, aims to find biomarkers of disease activity – that’s to say, something that can be measured in the blood, spinal fluid, or by brain scan, to indicate if and when the disease process is active, before the person develops symptoms of memory loss. Results from the first 128 participants were published recently in the New England Journal of Medicine and changes in the spinal fluid were detected 20-25 years before symptoms would be expected, with changes on PET scans 10-15 years before.

These results need to be confirmed by longitudinal studies; we hope the biomarkers will also be able to measure the effects of preventive drugs in the forthcoming clinical trials of preventive medications.

We have to admire the courage of people like Chontell, who have decided to confront the future head-on and participate in the DIAN research program, which is quite rigorous and time-consuming, involving several days off work, a lumbar puncture and a trip to Melbourne for special PET scans.

Our participation in DIAN became possible because of our involvement with families over more than 20 years. I first met members of Chontell’s family in 1988, but it was not until at least ten years later that the family gene was identified in a collaboration with the University of Melbourne. Short term grant funding has been obtained at intervals over the years, but family developments have a habit of not fitting well into a three-year grant cycle, and the reason the families have stayed with us so long is because of extra funding from sources such as this appeal, for which I personally am very grateful.