Schizophrenia and the immune system, an inflammatory topic

Our new study suggests that we can add schizophrenia to the list of diseases containing an immune system element.  As such, this provides a new set of targets for therapeutic interventions in schizophrenia, which in combination with previous treatments can help alleviate the burden of this disease. You can read the paper here, and the media release here.

We all have an immune system, an amazingly complex array of cells receptors and signaling molecules that protect us from both external invaders and our own cells gone bad.  As with any complex system though, sometimes the immune system goes awry and the result can be a large number of diseases spanning rheumatoid arthritis to multiple sclerosis.

We know that parts of the immune system are activated in individuals with schizophrenia in the brain and peripheral blood circulation.  One of the most commonly measured immune elements in peripheral circulating blood are signaling molecules known as Interleukins, or ILs.  However, no evidence has been found thus far for changes in ILs in the brain. 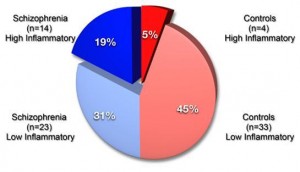 We then identified pathways of related mRNA transcripts differentially expressed between people with schizophrenia and people without the disease, confirming immune response and inflammation as leading candidates. Specifically, we were able to confirm that IL-6, IL-8 and IL-1B mRNA were upregulated, as were increased numbers of microglia, the brain’s resident immune cells, in schizophrenia.

It appears that this change is driven by a subgroup of about 40% of the total number of individuals with schizophrenia who have drastic immune elevations.

Stu Fillman is completing his PhD in molecular aspects of schizophrenia under Prof Cyndi Shannon Weickert at NeuRA.