How does having dementia affect everyday activities?

A NeuRA study recently investigated how different types of dementia affect the ability to perform everyday tasks. The focus was on progressive nonfluent aphasia (PNFA) and logopenic nonfluent aphasia (LPA) – two dementias that lead to similar problems in language (at least to the untrained ear, not so according to specific language tests). Under the microscope these dementias look very different: PNFA dementia is more closely linked to frontotemporal dementia, and LPA is more closely linked to Alzheimer’s disease.We expected to find that people with LPA would have similar everyday problems to people with Alzheimer’s disease, because of their pathological connection. Our study confirmed this, but also showed us that all three dementia types (LPA, PNFA and Alzheimer’s disease) affect everyday tasks similarly. 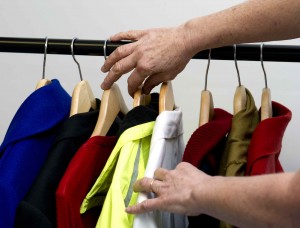 Choosing the right clothing for an event one was of the tasks measured in this study.

For simple everyday tasks the three dementia groups were virtually identical, that is, all three groups of people were very independent and high functioning (some even live alone in the community). But for more instrumental tasks, people with Alzheimer’s disease had the lowest performance and people with LPA group performed the best, even though under the microscope they share a common pathological process.

Our study suggests that changes in the brain, behaviour and every day abilities are mostly dependent on the brain area that is diseased and not necessarily the disease process.

Does this pattern change over time?

We re-examined patients about a year later to see whether the similarities and differences between the dementias change over time. And so they did.

People with PNFA declined markedly on basic activities, such as choosing the right clothes for a particular occasion. People with LPA and Alzheimer’s disease did not get worse at these tasks, and they remained independent. For more complicated instrumental activities all three groups declined substantially and equally.

These similarities and differences show that the delivery of dementia care should differ depending on the type of dementia someone is diagnosed with. Not all dementias are equal, and the way symptoms change over time means that patients (and their families) will require different levels of support at different times.

Eneida Mioshi is a NHMRC Postdoctoral Research Fellow with the Kiernan Group. She is interested in how the behavioural and cognitive changes caused by disease, affect disease progression, prognosis and care.

Ben Bravery is a science communicator and writer at NeuRA.