Musical cognition: the demise of ‘left-brain right-brain’? | the NeuRA blog

When looking at a human face we take it for granted that we can distinguish a happy face from a sad face and a scary face from a relaxed face. People with Alzheimer’s disease and other dementias often exhibit deficits in this area, and while this is interesting from a cognitive perspective, it has real world implications for the families of people with these diseases. 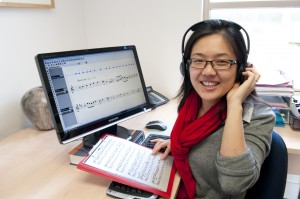 However, little is known whether this disruption to emotional processing extends to other stimuli, and whether different dementias are affected in different ways.

An extremely common platform of emotional engagement for people is music. The melodies in music can be inherently identified by people, regardless of culture, as positive or negative, uplifting or depressing.

Do people with dementia have trouble extracting emotion from music in the same way they are unable to extract this information from human faces?

A recent study investigated the ability to recognize emotions in pictures of faces and pieces of music in patients who have a diagnosis of dementia. Patients either had Alzheimer’s disease (the most common form of dementia) or semantic dementia (rare type of dementia affecting factual knowledge about words, animals, objects, sounds, and people). Healthy participants of a similar age were also recruited as a comparison group.

Participants listened to unknown pieces of music composed to represent one of the following emotions: happy, sad, scary or peaceful. They were then asked to select which emotion label best represented the tune. Participants also had MRI brain scans. Patterns of brain atrophy revealed on MRI was then compared to performance on the faces and music test. 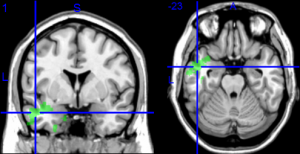 The highlighted area is the left anterior temporal lobe, located just behind the left ear. This area is vital to both identifying emotion in music and understanding meaning in language.

Identifying emotions in photographs of facial expressions and in musical melodies was affected in both dementias, and people with semantic dementia were more impaired than Alzheimer’s disease.

For both types of emotional material (faces and music) right-sided regions of the brain (amygdala, temporal pole and insula) were important. However, for music, left-sided regions involved in language and verbal skills were also needed.

Emotional cues seem to rely on both common and differing brain areas. The study challenges our current understanding of how emotions are processed and raises the interesting question of whether verbal and musical stimuli are handled in the same way by the brain.

And to bring this back to people with dementia and their families, it is clear that not all dementia types are affected in the same way. These differences have important implications for family members that care for a loved one with a dementia.

Dr Sharpley Hsieh is lead author of the study described here and a Postdoctoral Fellow with the Hodges Group at Neuroscience Research Australia.

Ben Bravery is a science communicator and writer at Neuroscience Research Australia.