In addition to the ‘classic’ symptoms of psychosis which include delusions and hallucinations, people with schizophrenia often have problems with ‘executive functions’. This is a cognitive system that resides predominantly in the frontal lobes and regulates other cognitive processes. It is typically invoked when automatic processes need to be overruled to produce appropriate goal-directed behaviour. Another domain that is often affected in schizophrenia is emotional processing.

In my latest study I wanted to investigate how the brain controls behaviour in the context of emotion processing, and whether people with schizophrenia responded differently.

To this end, my colleagues and I used functional magnetic resonance imaging to measure brain activation in people with schizophrenia and a group of healthy adults while they performed an ‘emotional go/no-go task’. In this test, we present participants with written words that have a positive, negative or neutral meaning. Participants are instructed to respond by pressing a button as quickly as possible to words of a particular valence, but to withhold responses to all other words.

Because emotional words are stimuli that automatically attract attention, they are harder to ignore. Having to suppress responses to these stimuli challenges the behavioural control system. This was clearly reflected in the brain response of healthy people. An extensive network of frontal and parietal brain regions known to be critical in controlling behavioural output, was more engaged when participants had to suppress their response to negative words compared to neutral ones.

Interestingly, the brain responded roughly the same during response suppression to positive and neutral words. In fact, the cingulate cortex – a region specialized in directing attention – was less active during response suppression to positive words. People with schizophrenia on the other hand, failed to engage this control network when instructed to suppress responses to negative words. When instructed to suppress responses to positive words, contrary to their healthy counterparts, people with schizophrenia showed no reduction of activation, but rather a slight increase of activation in the frontal lobe.

These results imply that the brain’s ability to regulate behaviour in response to emotional triggers is impaired in schizophrenia. We know that the ability of the frontal lobe to modulate goal-directed behaviour in emotional contexts plays an integral role in successful psychosocial functioning. Thus, this brain impairment may also contribute to the broader psychosocial problems that people with schizophrenia experience.

Dr Ans Vercammen is a research officer with the Weickert Group at NeuRA and an expert in the cognitive and neural basis of auditory-verbal hallucinations in schizophrenia. 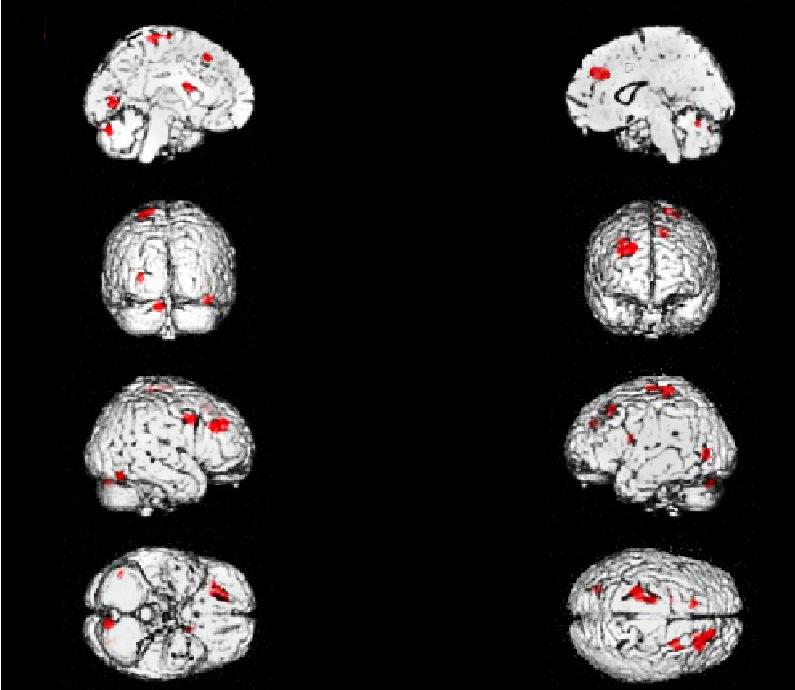 Parts of the brain (in red) active in healthy people that are not active in people with schizophrenia when asked to inhibit their natural emotional response to certain words.