On August 11 2019, 54 people took on the City2Surf for Neuroscience Research Australia (NeuRA). The event is the world’s largest fun run with 80,000 participants taking on the 14km course, which stretches from Hyde Park in central Sydney to the iconic Bondi Beach.

NeuRA thanks all of its fundraisers, who raised an incredible $30,903.  This funding will further NeuRA’s mission to ‘Discover, Conquer and Cure’ disorders of the brain and nervous system. The top fundraiser was George Hughes, who raised $4,056 in support of his mother who has been diagnosed with a neurological condition known as progressive supranuclear palsy (PSP). Unfortunately, PSP is a rare condition with no known cure. George had seen the impact this has had on his mother’s physical and emotional wellbeing.

“It’s frustrating and heartbreaking to see a loved one suffer, knowing there’s not much you can do to stop it from happening,” said George.

“In time, and with the right level of funding, I am confident we’ll find ways to cure such diseases as PSP. I’m determined to do my part to ensure that we get to this point as soon as possible. That’s why we need to drive up awareness of such conditions, raise much needed funds and support the medical and scientific community in their efforts.”

George was closely followed by Nigel Edward Walker who, since being diagnosed with Parkinson’s disease three years ago, has “sought to live life to the fullest by working, running, trekking, golfing, gardening and much more.” Nigel raised $3,714 to help make a difference for others living with Parkinson’s.

NeuRA staff met with the runners before and after the race, which was a highly rewarding experience. We heard about how neurological injuries, diseases or disorders have touched their lives. Their stories reveal their appreciation for research and hope that we can together develop better treatments for themselves, mothers, fathers, and friends. We are so grateful for all of their fundraising efforts.

It’s not too late to contribute to Team NeuRA

Community fundraising is vital to NeuRA’s work.  It generates funds for critical research and builds awareness in the community about our activities and research. We thank community fundraisers for telling family, friends and work colleagues about why they are so passionate about our cause. We love to see our runners proudly wearing the NeuRA logo on race day, encouraging others to champion medical research in Australia. 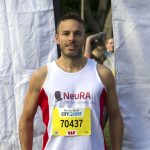 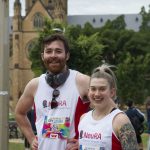 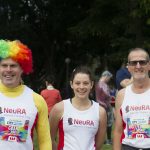